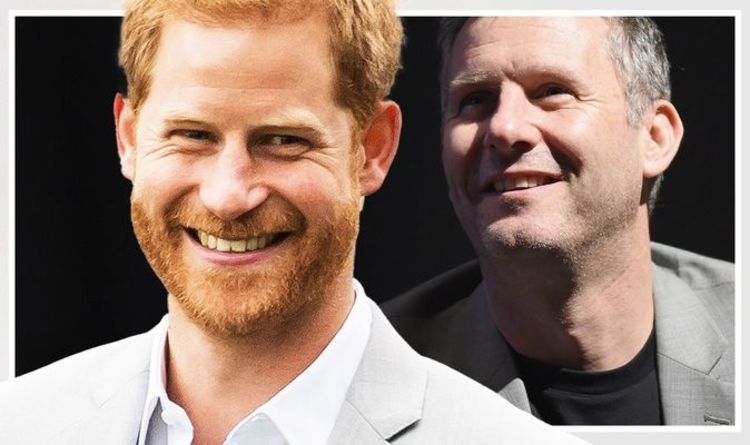 Adam Hills is back on presenting duties for the latest episode of Channel 4’s “The Last Leg” tonight. Along with his regular co-stars Alex Brooker and Josh Widdecombe, the Australian comedian runs down the highlights of the ongoing Paralympic Games, which finish on Sunday. The chat show, which first aired during the London 2012 Paralympics, proved a huge success when it was first broadcast.

The series has featured a string of guests from the worlds of athletics, showbiz and politics.

Adam is not afraid to grill politicians on The Last Leg and has been known to use the show to air his own political views.

In January last year the funnyman used his platform on the show to defend Prince Harry amid the backlash over his and his wife Meghan Markle’s decision to step back from their royal duties.

The Duke and Duchess of Sussex announced their dramatic departure from the Firm early last year.

The week after their bombshell revelation Adam met Harry at Buckingham Palace as the Duke participated in the official draw for the 2021 Rugby League World Cup.

The Duke’s first public engagement since parting ways with the monarchy saw him take an interest in the comedian’s huge beard.

A video of the encounter shows Harry being introduced to Adam and gesturing at the comedian’s facial hair before he asks: “When did you grow this?”

Mr Hills replied: “I said I would grow it until Brexit is sorted.”

The Duke then said: “OK, we’ll come back to that” and proceeded to greet other guests.

Later, the pair reconvened, and Harry asked Adam if he was “still playing?”

The Duke, who also has a groomed ginger beard, said “well maybe, we’ll see” in response to Adam saying he hoped he could shave his beard off in two weeks’ time.

The timeframe was a reference to January 31, which was the date Britain finally left the EU.

Adam had his beard shaved off live on a special edition of The Last Leg broadcast on the eve of Brexit.

The trio were also joined on the set by guests Armando Iannucci, Guz Khan, Aisling Bea and Geoff Norcott.

Ahead of the shaving, Adam said: “It’s divided a country, it’s certainly divided my family, the public have voted, tonight at 11 o’clock, my beard is coming off.”

The comedian eventually raised £10,000 for charity after listing his beard for sale on eBay.

The latest episode of The Last Leg shows tonight on Channel 4 from 10pm-11:05pm.