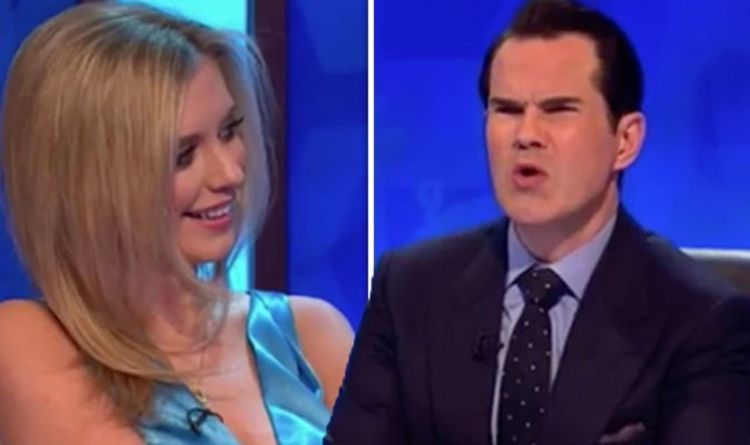 Rachel Riley, 33, who is a mathematician on the Channel 4 show Countdown, was joined by her regular colleague Susie Dent, 54, on a recent episode of spin-off, 8 Out of 10 Cats Does Countdown. The lexicographer who fronts “Dictionary Corner” stunned the television host and comedian Jimmy Carr, 46, after she made a bizarre revelation live on-air. Speaking about herself and Rachel’s recent holiday getaway to Dublin, Susie cheekily joked the pair shared a “hot night”. She said: “We went to Dublin and we had a really good weekend.”

Susie continued: “To cut a long story short at the end of the night we were looking for a late night chemist. As you do.”

Her admission was met with laughter from the studio audience as interest piqued of where the story was going.

Susie said: “So we went in and we couldn’t find what we wanted on the shelf. So I went up to the counter.

“What I was looking for was a hot water bottle because it was really, really cold.”

“There was no water bottles on the shelves,” she explained. “So I said ‘Do you happen to have a hot water bottle?’ to the pharmacist.”

Susie added: “And he said ‘Yes, I do,’ and he lent down behind the counter. And he got this massive long hot water bottle that I guess is like a bolster that you put next to you.

“And Rachel just looked at me and said ‘Yes, Susie likes a long one’.”

Susie finished: “That was it really. That kind of summed up our evening. But we had a hot night,” before she abruptly corrected herself saying: “A warm night.”

The studio audience certainly saw the humorous side of the tale as Susie’s remark was met with even more laughter.

Rachel and Susie have been pals on the Channel 4 show Countdown since the former joined the series in 2009.

Meanwhile, the mathematician recently gushed about some sweet new family members on 8 Out of 10 Cats Does Countdown as she revealed her brother has taken in two kittens.

The star, who is expecting her first baby with husband Pasha Kovalev, 39, announced the arrival of the pets when host Jimmy quizzed her about them on the Channel 4 programme.

The comedian turned to his co-star and said: “Rachel, I believe you’ve welcomed some new additions to the Riley family. What have you got?”

“My brother has got kittens, so I’ve now got kitten nephews,” Rachel replied, as she beamed with delight.