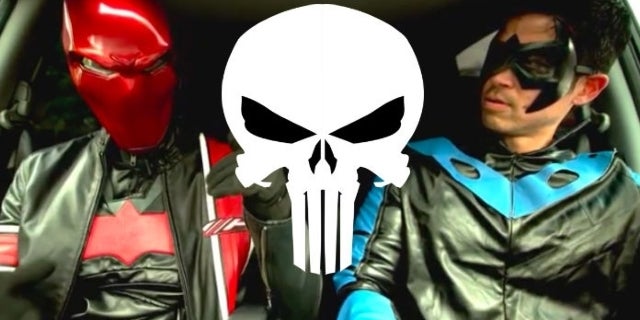 No one seems to have worse taste in movies than DC’s Red Hood, according to the Super Stakeout videos from GEGGHEAD. The sketch series shows Red Hood (Freddie Prinze Jr.) and Nightwing (Jon Lee Brody) hanging out in their car while they wait to catch bad guys. Oftentimes, the two masked men discuss film and television, and Red Hood’s takes are almost always terrible. The DC characters have reviewed everything from Avengers: Endgame to Miss Congeniality and their latest discussion tackles the various versions of Marvel’s The Punisher.

“I can’t even believe I’m gonna make a Marvel argument, but there’s only one Punisher in the history of that entire franchise that has been worthy with the acting, the physique, and the skill, and that’s Dolph Lundgren,” Red Hood proclaims.

While there’s nothing wrong with praising Lundgren, Red Hood goes on to call the John Wick films “crappy”, proving once again that he has terrible taste.

ComicBook.com spoke with Brody about the video and jokingly asked if Prinze Jr. wears the Red Hood mask solely to avoid being associated with such bad takes.

“Ha! Well, most actors enjoy being masked up. It’s very liberating. You can try out new voices and stuff and not worry which facial expressions you’re making,” he replied. (Okay, that’s fair!)

We also asked Brody which Punisher is his personal favorite, and what his opinions are on all of the Netflix series being canceled.

“Well, I will say my favorite Punisher was actually John Beck, the voice actor. He voiced the Punisher in three episodes in the mid-‘90s Spider-Man cartoon. Even though they had to make him use non-lethal weapons (it was a kids show after all), I very much enjoyed the take on the character,” Brody replied.

“As far as the Netflix shows are concerned, I feel like it was bound to happen. At some point, Marvel/Disney was going to take the reins. They did it with Spider-Man, it looks like it’s happening with X-Men, and now the Netflix shows. It will be interesting to see what happens next,” he answered.

GEGGHEAD has tons of original content, but their latest venture is going to be a blast from the past for any Prinze Jr. fan.

“I wanna add that we’re currently doing the full run of Freddie season one every Friday at 5 PM PST on GEGGHEAD,” Brody shared.

Freddie was a sitcom starring Prinze Jr., Brian Austin Green, Jacqueline Obradors, Mädchen Amick, Chloe Suazo, and Jenny Gago that ran on ABC in the mid-2000s for one season. The series was inspired by Prinze Jr.’s real-life experience of growing up in a house filled with women.