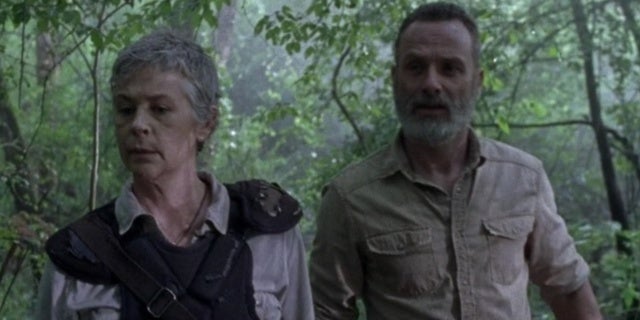 As aired, Rick and Carol break off together when searching for missing Arat (Elizabeth Ludlow), feared to be the latest Savior picked off by a then-unrevealed culprit acting out against Rick’s pardoning of Negan’s people. Rick then sheds more light on his unilateral decision to spare Negan (Jeffrey Dean Morgan) when ending the war against the Saviors.

The Alexandria leader admits to having second thoughts about integrating the Saviors among the other communities, a move that caused infighting threatening the collapse of the new world Rick and the others worked to build.

“Every day since I put Negan in that cell, I have this moment, usually right when I wake up, this feeling that I should go down there and kill him. To keep going and finish them all,” Rick says. “In that moment, it’s all I want.”

But 18 months after the end of the war, Rick is trying to do better by late son Carl (Chandler Riggs).

“But then I remember everyone we’ve lost. Not just to the Saviors, but the whole way. And I know I need to honor them. To build life, not take it,” Rick says. “Because it’s us or the dead. Every life counts now.” Rick then walks off, and the scene cuts to Daryl (Norman Reedus) and Maggie (Lauren Cohan).

In a deleted extension of the scene included on the Season 9 Blu-ray, Rick and a ring-wearing Carol exchange pleasantries over finding respective loves Michonne (Danai Gurira) and King Ezekiel (Khary Payton).

“It looks good. I’m happy for you,” Rick says. “In all this, you found a good person, the right person.”

“You too,” Carol replies. “Who would have thought?”

The Walking Dead Season 9 Blu-ray is now available for pre-order ahead of its Tuesday, August 20 release.