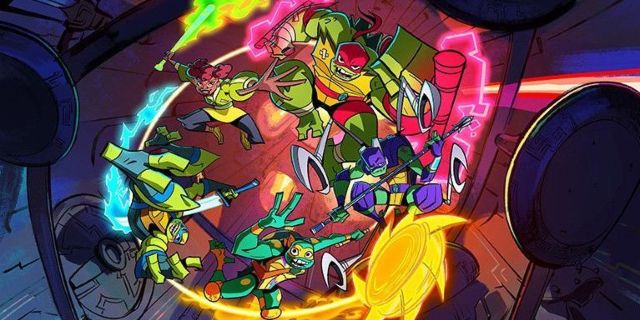 Since it premiered last fall, Rise of the Teenage Mutant Ninja Turtles has introduced a whole new generation of fans to Leonardo, Michaelangelo, Donatello, and Raphael. Outside of the show airing on Nickelodeon, the series’ reach is set to expand even more, with a feature-length animated film in production for Netflix. While there haven’t been any major updates since the film was announced in February, ComicBook.com got some early details from the show’s creative team at last month’s San Diego Comic-Con. While the team didn’t reveal any major plot points or spoilers, they hinted at the film’s unique role in bridging the gap between Rise‘s first and second seasons.

“I think fans, old fans, are going to see something — a unique take on a very familiar territory.” executive producer Andy Suriano explained in our video interview, which you can check out above.

“And then you’re going to season two, we up the ante, lots of surprises in store,” executive producer Ant Ward continued.

“Yeah, and watching these characters grow in unexpected ways.” Ward explained. “And then, with the movie, you kind of have to maybe see what comes down the line. But it’s going to be a bit of both, you know? I think, if you’re watching the show and you’re a fan of the show, you’re going to get a really complete experience with the movie. But it’s also going to be a really exciting stand-alone set piece if you’re not directly familiar with the show.”

Rise of the Teenage Mutant Ninja Turtles reimagines the Turtles with new designs and new dynamics. The series is set during the team’s earliest days as ninja vigilante, with Raphael taking Leonardo’s usual role as team leader. Rather than fight Shredder and the Foot Clan, the Turtles deal primarily with the hidden mystical side of New York City, fighting often with the Yokai of Baron Draxum, the ruler of the New York’s “Hidden City.”

Are you excited for Rise of the Teenage Mutant Ninja Turtles‘ animated film? Share your thoughts with us in the comments below!