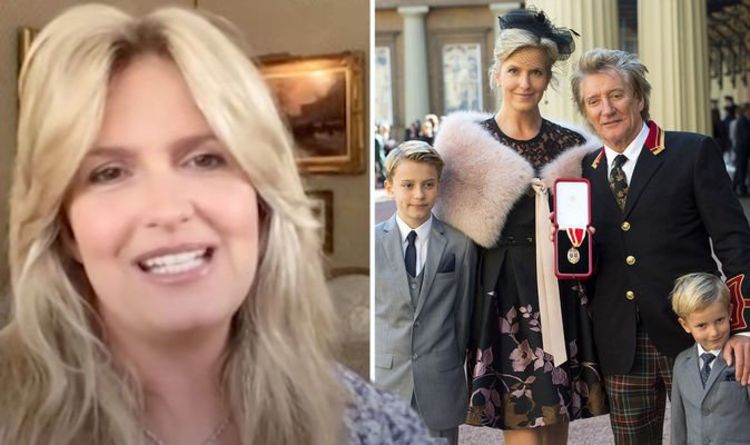 Rod Stewart, 76, and Penny Lancaster, 50, who married in 2007, share sons Alastair, 15, and Aidan, 10, together. Speaking on Loose Women today, the former model discussed experiencing a feeling of “guilt” following the birth of their second son.

In a discussion about feeling mum guilt after a second baby, Penny revealed she tried her best to ensure her sons and husband Rod received equal attention.

She spilled: “I remember Alastair, he was about five when we discovered that finally after three IVF’s I was pregnant with Aidan, he was praying for a boy and it was, of course.

“So, I just made sure that right from the beginning he was very much involved.

“He would feed Aiden and teach him how to play football, so he was as part of his life.

“But yeah, there was that kind of guilt sharing my time around including my third boy, my husband,” she laughed.

Penny’s co-panellist Nadia Sawalha chimed in: “Sometimes it’s a bit easier when they’re a bit older,” as she went on to discuss her own experience.

It’s not the first time Rod’s wife has opened up about trying to split her time and love equally in their household.

Ahead of their first born’s birth, Penny admitted that Rod had asked her not to “neglect” him when the baby was born.

Recalling her reaction, she added: “And I said, ‘I won’t darling’, and of course when the baby comes along and you have baby brain and you’re breastfeeding it’s difficult.”

Penny added she made “a very conscious effort” for her husband not to feel left out.

“He said one golden rule, no baby in the bed, and I thought that was fair enough, families are about compromise,” she continued.

Rod’s wife went on to shock her co-stars by revealing she also went out for dinner just hours after she had given birth.