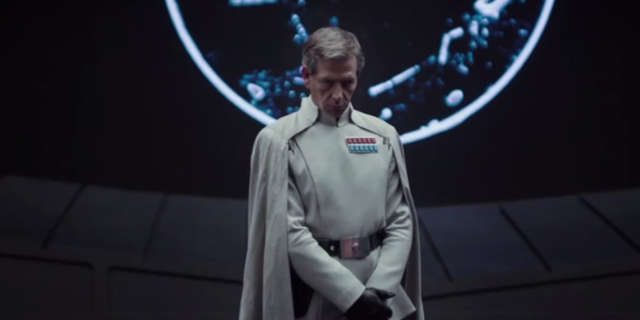 When audiences first witnessed the Death Star in Star Wars: A New Hope, we recognized that it was a massive undertaking to construct such a monstrosity, with a number of Imperials having to give their input and approval to make the space station possible. In Rogue One: A Star Wars Story, audiences learned about the story of bringing the battle station to life, realizing that Galen Erso, played by Mads Mikkelsen, was a key architect in designing the structure, but also in implementing a key weakness which would lead to its destruction. According to actor Ben Mendelsohn, however, it was his Director Krennic who was the key figure in its construction.

“Middle manager as principal villain, it’s an interesting idea,” Mendelsohn described of his character to GQ. “I have peddled the line and I will continue to peddle the line that he is the man that built the Death Star, even though there’s a very strong argument that Mads Mikkelsen’s character might have, but, you know, fuck it, right? You get the chance to claim you built the Death Star, I’m taking it. I’m running with it.”

The actor also went on to recall the experience of when he was offered the role in the first spinoff from the official Star Wars saga.

“Star Wars, I mean, I watched that film as a kid in Melbourne, in the city,” Mendelsohn detailed. “Star Wars was huge for me. [Director] Gareth [Edwards] approached me in a sort of super-secret meeting and I went to the top of some Beverly Hills hotel and sat on the thing and he said, ‘I want you to play the part of the villain in this upcoming Star Wars movie,’ and I was like, ‘Ay.’ And I had to keep a lid on it like, forever. I mean, when Darth Vader turns up on set… (laughs) yeah.”

Fans and critics alike connected with the ambitious spinoff, as it explored both a tragic and heroic chapter in the franchise. Many of the film’s characters met their demise before the adventure concluded, though a new series will explore the early adventures of Rebels Cassian Andor and his trusty droid K-2SO.

The series is described, “The rousing spy thriller will explore tales filled with espionage and daring missions to restore hope to a galaxy in the grip of a ruthless Empire. A release date for the series has not yet been announced.”

Stay tuned for details on the upcoming Rogue One prequel series, coming to streaming service Disney+.

What do you think of Mendelsohn’s thoughts on the subject? Let us know in the comments below or hit up @TheWolfman on Twitter to talk all things Star Wars and horror!