This Morning returned to ITV with the first show of the week and replacing Philip Schofield and Holly Willoughby to present throughout the summer holidays was Ruth Langsford and Eamonn Holmes.

After introducing the line-up for today’s show, the hosts were joined on a live video link by Mel Greig, an Australian DJ who was involved in a prank call which ended in tragedy.

Back in 2012, the Duchess of Cambridge was suffering from severe morning sickness and was being treated at London’s King Edward VII Hospital.

Eager to know the specific details, Mel and her 2Day FM co-host Michael Christian posed as the Queen and Prince Charles, and rang the hospital, fooling nurses into disclosing sensitive information regarding Kate Middleton’s condition.

While the joke spread across the globe, the situation turned sinister when nurse Saldanha took her own life three days later.

Seven years on, Mel spoke candidly to Ruth and Eamonn about the scenario and revealed the guilt she still feels.

She also described the backlash she received and continues to receive, describing it as a “witch hunt”.

“At the time we honestly did not think we’d get through [to the hopsital] or we’d get private information,” Mel explained.

“When that did in fact happen I remember I wrote an email to the team; ‘let’s dub over the nurses voices, he’s take out the private information because it’s not about that’. It was never about that it was abut how silly our accents were.”

“For a few days after it was getting quite a lot of attention for being a silly funny prank,” Ruth interjected. “When did you realise it had turned so sour and how did you cope when you heard that news?” 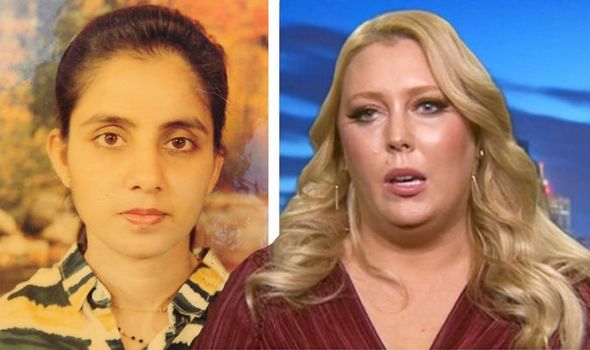 “It was a progression through the week. We made the call on the Tuesday, I was concerned, wrote the email,” she replied.

“The day after the hospital came out and said there would be no repercussions, the nurses involved wouldn’t be punished.

“Prince Charles makes a joke [about it to the press], ‘ok everybody’s ok with this. It’s time to laugh and think everything’d going to be ok’.

“We were worldwide news and everyone was laughing with us it appeared, even American big talk shows, in the UK they were doing sketches on what happened and when tragedy struck, that’s when this huge witch hunt took place,” Mel continued.

Jacintha was a duty nurse on shift at the hospital who answered the call from the Australian DJ’s but she was not the nurse who discussed the Duchess’ medical condition. 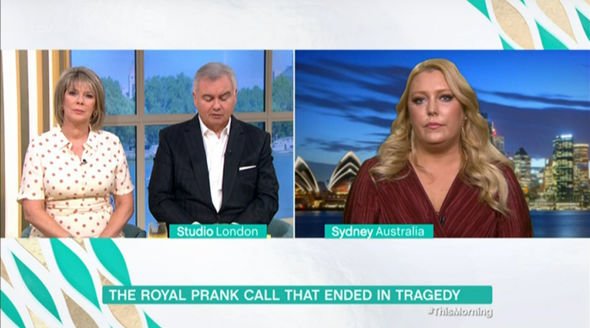 She answered the telephone at 5.30am because there was no receptionist available before finding another nurse to continue with the call enquiry.

The BBC understood at the time Jacintha was not suspended or disciplined by the hospital for her actions and instead she was offered “full and heartfelt support” from the Duke and Duchess of Cambridge.

It read: “Police were called at approximately 9:25am on Friday, December 7, to a report of a woman found unconscious at an address in Weymouth Street, W1. The London Ambulance service attended and the woman was pronounced dead at the scene.

“Inquiries are continuing to establish the circumstances of the incident…The death is being treated as unexplained.” 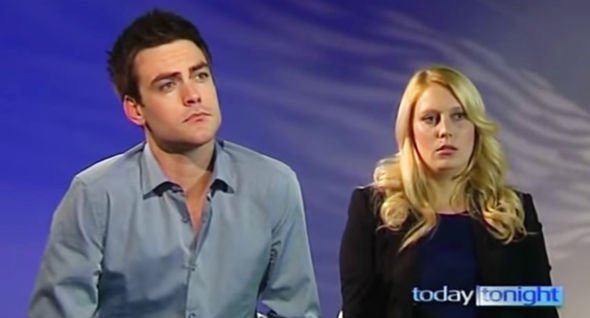 [The prank] was getting quite a lot of attention.

“It is with very deep sadness that we confirm the tragic death of a member of our nursing staff, Jacintha Saldanha. She was an excellent nurse and a well respected and popular member of staff with all her colleagues.”

Both Mel and Michael, as well as the radio station issued apologies for their involvement.

If you or anyone you know has been affected by the topic discussed in this article, please contact the Samaritans website here for confidential advice and support. Alternatively call their free telephone hotline on 116123.

This Morning airs weekdays at 10:30am on ITV.