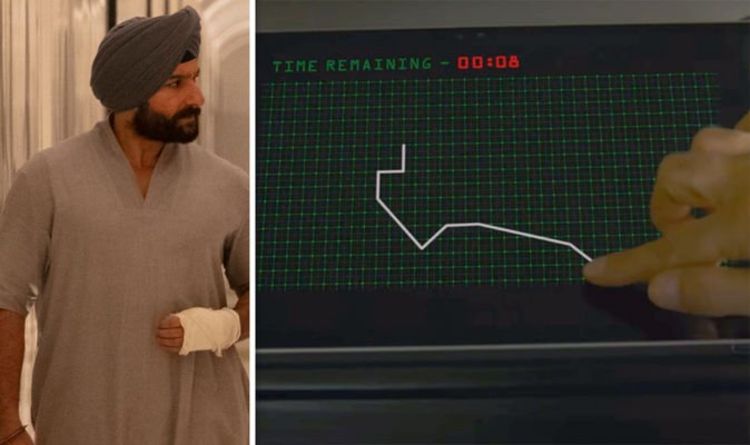 Season two of Sacred Games dropped on Netflix last week with eight new episodes for fans to race through. The new series used up the source material from Vikram Chandra’s novel of the same name which Sacred Games is adapted from. However, the finale also left things open-ended for the story to continue should the show get a recommission.

The police officer was seen putting different codes into the system as he tried to stop the bomb from exploding.

Sartaj only had three attempts left as the seconds ticked away and time grew closer to the explosion.

He put one last code in on his final attempted as the clock counted down but it was unclear if he’d been successful with the screen cutting to black.

However, some fans seem to have spotted a glaring error in the finale which seemed to reveal how the show ended.

Earlier on in the episode, Shahid Khan (Ranvir Shorey) was seen activating the bomb by putting in a code.

Sartaj’s final attempt was very different to the code Shahid inputted, suggesting the police detective had failed in his mission to save Mumbai.

A side-by-side comparison between the two patterns shows how different they are.

Sartaj was flicking through Guru Ji’s book to try and find a possible clue to the code.

Each page seems to have a different code with Sartaj trying Malcolm Murad’s (Luke Kenny) code as well as Ganesh Gaitonde’s (Nawazuddin Siddiqui) and Guru Ji’s.

All of the codes in the books looked more like constellations rather than the code and could be a complete misdirect.

READ MORE: Sacred Games season 3 Netflix release: Will there be another series?

However, one explanation may be there’s one code to activate the bomb and another to deactivate.

At this stage, it’s uncertain what will happen and this is only a theory about how to stop the bomb.

Fans will have to wait and see if Netflix renews Sacred Games to find out what will happen next.

If season three does get the go-ahead then we could find out the outcome of the bomb and whether Sartaj was able to avert crisis.

Then again, if Netflix doesn’t make a decision to renew the show then audiences may never know if Sartaj succeeded.