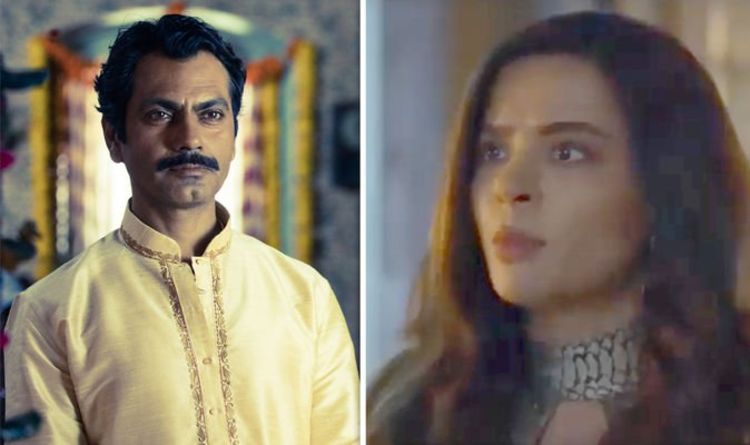 The second season of Sacred Games has already been devoured by many fans after landing on Netflix recently. Season two picks up pretty much from the last episode after police detective Sartaj Singh (played by Saif Ali Khan) discovered Ganesh Gaitonde’s (Nawazuddin Siddiqui) secret nuclear bunker and learnt more about the attack on Mumbai. Along with the two central strands: Sartaj’s race against time to stop the bomb and Gaitonde’s rise to power, audiences discovered more about the character of madam Jojo Mascarenas (Surveen Chawla).

Later on in flashbacks, audiences found out she was a pimp and boss to Zoya Mirza/Jamila (Elnaaz Norouzi) whom she sent to Gaitonde for sexual favours when he was in prison.

In season two we found out more about Jojo’s tragic backstory after she revealed her self-loathing and death wish.

Through a series of phone calls between Gaitonde and Jojo, we learnt the pimp had tried to end her life several times.

Jojo, who was Christian, went to confession and told a priest about her attempts to kill herself.

The character also appeared to be trying to attain penance for her past sins by self-harming.

Finally, after much mystery fans were put out of their misery and got Jojo’s backstory in episode six called Azrael.

Jojo and her sister Mary were aspiring Bollywood actresses who lived together and attended auditions as they pursued their dreams of fame.

They were rejected from numerous auditions but finally one day Mary hit the big time while dating a film producer.

Jojo described Mary’s life as a “Bollywood movie” while she continued to struggle and grew jealous of her sibling’s success.

In a desperate bid to become famous, Jojo had an affair with Mary’s producer boyfriend.

Mary caught the pair in a compromising position, which broke her heart and left her devastated that her sister could betray her in such a cruel way.

In the end, Mary took her own life after jumping from a building with Jojo left to deal with the consequences of her sister’s death and forever shouldering the guilt.

Afterwards, Jojo decided to pursue a very different line of work where she took on other young women into her employment, some of whom would be prostituted out while others became successful models and actresses.

Previously, Zoya had made reference to Mary and told Jojo that people within the film industry “talked” and her story could end up in the press if she wasn’t careful.

Jojo also told Gaitonde never to called her “sister f***er”, saying that he could use whatever slurs he wanted when he spoke to her apart from that one.

Given the insight into her backstory, the piece of dialogue now makes sense.

However, questions remain over whether Jojo really was working for Guru Ji (Pankaj Tripathi) or if she simply goaded Gaitonde into killing her. It seems Jojo was in on Guru Ji’s conspiracy of manipulating the gangster but there is an inkling of doubt.