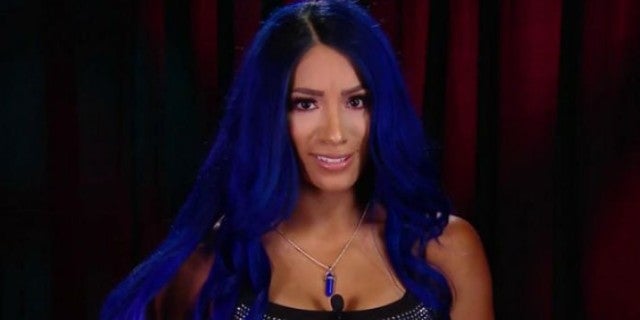 Sasha Banks appeared on Monday Night Raw this week to answer questions regarding why she violently attacked by Natalya and Becky Lynch on Raw the previous week.

When asked about her actions, Banks played it off like Michael Cole was asking about her dyeing her hair to blue.

“It’s been such a crazy, emotional week for me, and if you don’t mind I would love to explain from the very beginning. You see, last week, last week I looked in the mirror and I told myself, ‘Blue is your color!’ And I mean look at this. Isn’t that crazy? I mean, it’s all over social media!”

Cole then tried to get things back on topic, asking directly about Lynch and Natalya.

“You’re welcome,” Banks said, before unhooking her microphone and walking away.

When it comes to her attack on @NatbyNature and @BeckyLynchWWE, @SashaBanksWWE only has two words for us… #YoureWelcome #RAW pic.twitter.com/K7LHK6ZiY8

Banks returned to WWE television after spending nearly four months on hiatus. During her time away, Lynch gave multiple comments in interviews where she dared “The Boss” to come back and fight her.

“Yeah, [I would be interested in facing her] if Sasha Banks could hack it and she didn’t just get her jacket – and she’s off crying like Ronda Rousey – then I would love to face her,” Lynch said in an interview with Sky Sports. “But unfortunately, she couldn’t take losing. She lost the [WWE Women’s] Tag Team Championships and she was gone. She was gone! Some people can’t hack losing – they can’t step up. They can’t realize that when you lose, it’s just a chance to get better, it’s a chance to learn, and it’s a chance to grow.