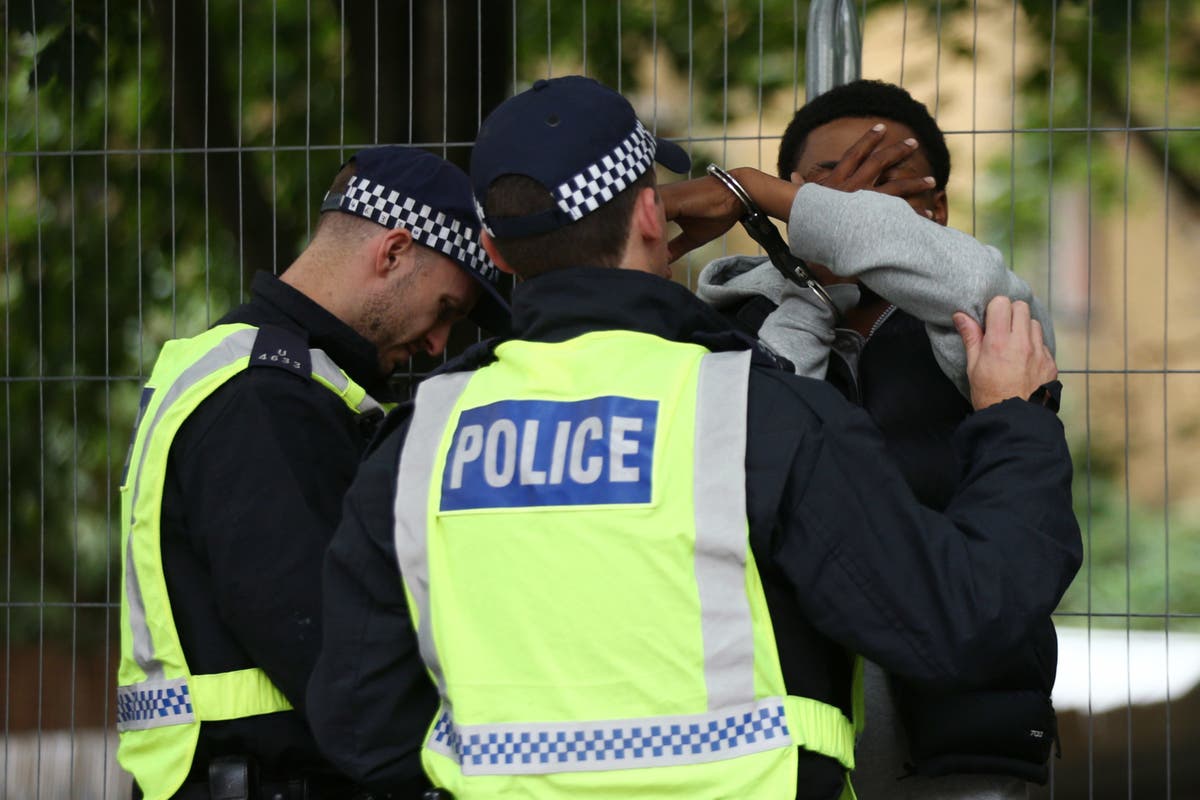 here comes a moment in the life of many a black London child when their parents sit them down and give them what is known in the black community as “The Talk”.

The purpose of this is to forewarn them that “because of the colour of your skin, because you are black, you are going to be treated differently by the police”.

Community workers say parents often accompany this with advice to children on their legal rights, what they should demand of police when targeted.

There was evidence of this youthful savvy on my north London street when a black teenager in a hoodie was peddling their bike and a police van drove up behind and beeped the youth to pull over. Five police officers leapt out and surrounded the youth, who immediately pulled out a mobile phone to record the interaction.

“Why are you stopping me,” the youth demanded, removing their hoodie and facemask. The police who had been swarming all over backed off. It only took a moment to see why. Beneath the hoodie was a slightly built female, no more than 15.

The girl was clearly shaken and as the officers retreated to their van, she shouted: “You only stopped me because you thought I was a black man.” Instead of apologising, one officer yelled back: “You ride like a man.” The girl shouted back: “Since when is it a crime to cycle like a teenager?”

Onlookers in our quiet road were shocked by the casual racism and sexism the police had displayed but this sort of toxic interaction is all too common across London.

When I recounted this incident to Commander Alex Murray, the Metropolitan Police’s head of violence reduction, he said: “Clearly we don’t always get it right. We are an organisation 45,000 strong. We have oversight groups that look at stop and search, that look at the body-worn video and see if it’s done properly.”

He added: “We are far from perfect in the way we tackle violent crime and the way we engage with communities. We always strive to improve and we have improved, but there is further to go.”

Mr Murray was talking to the Standard following our investigation that revealed seven-year-olds have been caught bringing knives into school and which identified poor police-community relations as one of the underlying factors behind rising youth violence.

I put it to Mr Murray and his accompanying police spokesman that for a long time officers had denied warnings from the community and insisted they were “getting the balance right” — and that this denial meant the problem of police community relations was pushed under the carpet and not properly addressed.

The spokesman said: “We recognise that trust and confidence in the police is not as high as we would like and that there is more work and learning to be done. But I have been at the Met a long time and I can tell you that what you are seeing now is a step change in approach — and definitely for the better.”

So what are they doing that’s different? Mr Murray said: “Building trust is one of our two top priorities along with reducing violence. The amount of police time that goes into outreach is enormous.

“Recently I was at a MyEnds meeting in Croydon with largely black communities and we had some very difficult conversations. This year we are planning 144 positive action initiatives —local officers engaging in areas where there is a lack of trust and high violence so that officers can see the face behind the mask and local people can meet and see police as normal people.”

But youth workers and campaigners say that police outreach is patchy and that the good work in one area is undone by over-policing and stigmatisation of black youth in another. They also say that some white officers who grew up outside London meet black youth for the first time only as suspected perpetrators and have a skewed perception of black youth that exacerbates relations.

Mr Murray said: “We recognise that as a problem. When you join the police, we are asking new recruits to spend time with community groups in the areas they will police because they may not have come from those areas. We are making sure officers get proper training around stop and search. We call it procedural justice, treating people with dignity and respect and explaining what we are doing and why.”

Mr Murray said he supported the trauma-informed public health approach which shares the burden with Government and other agencies and admitted the police could not be all things to all people.

He said: “The way to get violence down is to understand what each agency and group can bring. We solve 95 per cent of homicides and we can be a strong deterrent, but the Government has a responsibility to reduce poverty.

“There are a whole lot of areas — such as cognitive behaviour therapy, school intervention, poverty reduction and mentoring — that reduce violence but which the police do not excel at.”

He added: “There has been a lot of research into what we call adverse childhood experiences. Some people who are victims or witnesses or traumatised can later end up being involved in offending. And then there are people who carry knives to defend themselves. The facts are that if you carry a knife, your chances of having one used against you and being stabbed are much higher.

“It’s complicated but what we now know is that it takes a whole system approach to tackle violence.”