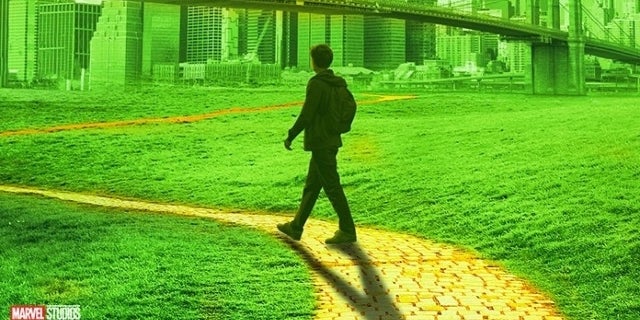 We’re nonetheless about two years away from the third Spider-Man movie set in the Marvel Cinematic Universe. The break day has given a while for followers to plot a brand new title and because of an epic new poster from BossLogic, Marvel Studios may need gotten its finest fan concept but. Playing off the Sony and Disney deal upheaval this summer season, the fan artwork teases the title as Spider-Man: No Place Like Home. A basic line from The Wizard of Oz, the fan artwork maestro used the movie’s yellow brick highway to indicate Peter Parker’s (Tom Holland) return to the MCU. Then, for followers chomping at the bit for a crossover, Dr. Strange (Benedict Cumberbatch) is looming massive in the clouds.

It was a making an attempt couple of weeks for followers of Marvel Studios however lastly, Sony and Disney had been capable of settle a deal that may enable Holland’s take on the character to seem in at the least two extra live-action movies. Disney chief Bob Iger even confirmed in an interview Holland himself was instrumental in bringing the studios to a deal.

“Miraculously. He was. We had an occasion known as D23, and Tom was there as a result of he’s a voice in [Pixar’s Onward]. He mentioned one thing on stage, and it was clear that followers wished Tom again as Spider-Man, made by Marvel and our Marvel manufacturing workforce,” Iger mentioned. “And after D23, Tom reached out to folks who work for me and said, ‘Can I please have Bob’s e-mail address or phone number?’ Of course, I’m very protected, so they were very careful. I said ‘Sure, have him contact me,’ and he did.”

He added, “We spoke. And he basically made a — he cried on the phone, no, not really. But it was clear that he cared so much. And actually, we care about him.”

Who are you hoping to see as the villain for Spider-Man 3? Let us know your ideas in the feedback under!