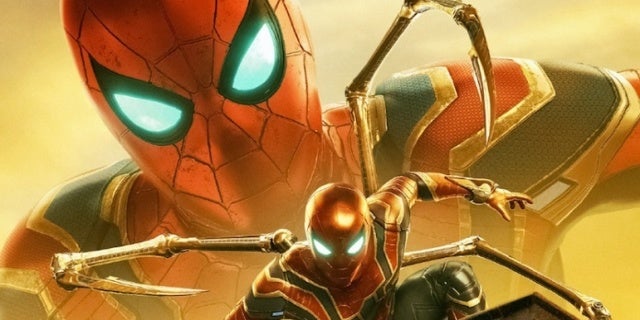 Sony Pictures’ Labor Day weekend re-release of Spider-Man: Far From Home will include a four-minute action sequence, according to The Hollywood Reporter’s Borys Kit.

The additional action scene could be a dropped sequence showing Spider-Man (Tom Holland), sporting his Iron Spider armor from Avengers: Endgame, taking on a New York crime family inside a restaurant before going on vacation. The sequence, advertised in multiple trailer and TV spots, was “in the movie for a while,” director Jon Watts told io9 in June.

“It’s part of a montage where Peter is running a bunch of errands that he has to do before he flies to Europe,” Watts explained. “And the joke was his errands were he had to buy a dual headphone adapter… he had to get one of those European travel plugs, he sold some of his action figures so that he would have enough money to [minor spoiler removed], pick up his passport, and he had to take down this extremely dangerous crime family. That’s Spider-Man’s to-do list.”

That “minor spoiler” was Peter selling off some prized possessions, including his Star Wars action figures, to fund his purchase of a Black Dahlia necklace for crush MJ (Zendaya).

Peter’s to-do list will be “its own little short film that we’re going to put on the Blu-ray,” Watts revealed during the Far From Home press junket. “There are some good deleted scenes.”

In July, Far From Home became the first Spider-Man movie to earn a billion dollars at the global box office. In August, the Homecoming followup officially bypassed 2012’s Skyfall to become Sony Pictures’ highest grossing film of all time, webbing up $1.109 billion.

Disney-owned Marvel Studios, creative producers on the Sony-owned Spidey franchise, first issued a special cut of Endgame to theaters as part of its campaign to dethrone the James Cameron-directed Avatar as the highest grossing film of all time — a feat it accomplished over San Diego Comic-Con weekend in July.

Spider-Man: Far From Home swings back into theaters Thursday, August 29.