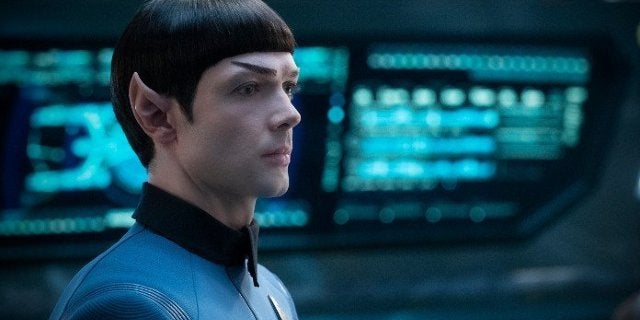 Star Trek: Short Treks made a shocking return on Saturday with the unannounced debut of the brand new episode “Q&A.” The episode chronicles Spock’s first day aboard the Enterprise, highlighting his first assembly with the ship’s first officer, Number One. Ethan Peck and Rebecca Romijn each returned to reprise their respective roles as these characters, which they performed within the second season of Star Trek: Discovery. A brand new featurette launched by CBS All Access, seen above, has the 2 stars going in-depth on what the brand new episode of Star Trek: Short Treks is about, what it means for his or her characters, and the way filming Short Treks differs from engaged on Discovery.

“Being again on the Enterprise for Short Treks was actually surreal and coming again to the Enterprise in the way in which that we did was actually enjoyable too, as a result of it’s Spock’s very first day on the Enterprise, and that felt like such an honor to play that second in his life,” Peck says. “Spock’s come straight from Starfleet Academy. He’s just beamed aboard. And greeting him there is Number One, played by Rebecca Romijn. And then she’s challenging him right away. This episode really sets them up in a great way because Spock will learn so much from her, and I think her from him, in a sort of like a master and apprentice sort of way.”

Romijn says, “It’s an exquisite glimpse into this early relationship and I believe what occurs on the turbolift is an actual assembly of the minds and the viewers will get to find how alike primary and Spock truly are. They’re each very inquisitive. They each have huge data.

As far because the manufacturing course of, Peck and Romijn each appreciated the intimate nature of the quick movie. “My favourite a part of filming Short Treks was the intimacy of it,” Romjin says. “It was like shooting a one-act play and it felt really fun and satisfying.”

“It’s totally self-contained,” Peck says. “There’s not a serial, overarching story. These moments aren’t tied to anything else, so you can really be moment-to-moment in the present with the character right in front of you.”

Peck ends the featurette by reflecting on what coming aboard Enterprise means for Spock. “This is a guy who always felt like an outsider that is finally on a ship with people who have probably themselves felt like outsiders,” he says. “Starfleet is, what’s wonderful about it is that it’s a place for people who feel strange and different to go and feel welcome, to feel celebrated and to use their uniqueness to the advantage of the entire team of Starfleet.”

What did you consider “Q&A”? Let us know within the feedback. The episode is out there to stream now on CBS All Access. A brand new installment of Star Trek: Short Treks, “The Trouble with Edward,” premieres on Thursday, October 10th. You can watch the episode’s trailer right here.