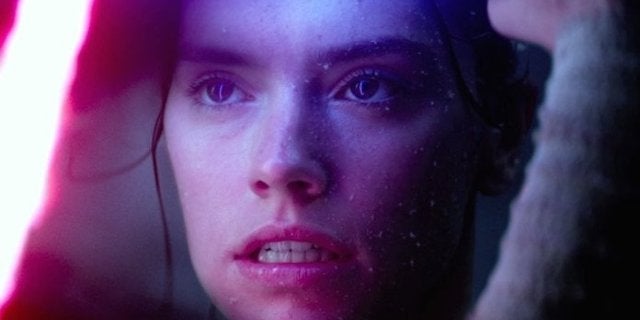 Today during the Walt Disney Pictures panel at the D23 Expo, Lucasfilm debuted new footage from Star Wars: The Rise of Skywalker. The footage showed Rey wearing black and wield a red dual-lightsaber. Those colors and that weapon are both evocative of the dark side of the Force. After the panel, star Daisy Ridley, who plays Rey, told Variety about what it’s like touching both sides of the force in her third Star Wars movie.

Lucasfilm also revealed a new poster for The Rise of Skywalker. The poster shows the sequel trilogy’s two leads, Rey (wielding her usual blue lightsaber) and Kylo Ren (Adam Driver), dueling on the edge of some detritus while Emperor Palpatine, aka the Sith Lord Darth Sidious (Ian McDiarmid), watches from above. Palpatine’s return brings the Skywalker saga full circle in its final chapter, pitting the two sides of the Force against each other once again.

What do you think of Rey flirting with the dark side in the new Star Wars: The Rise ofSkywalker footage? How do you think the Skywalker saga is going to come to an end? Let us know what you think about all of this in the comments.