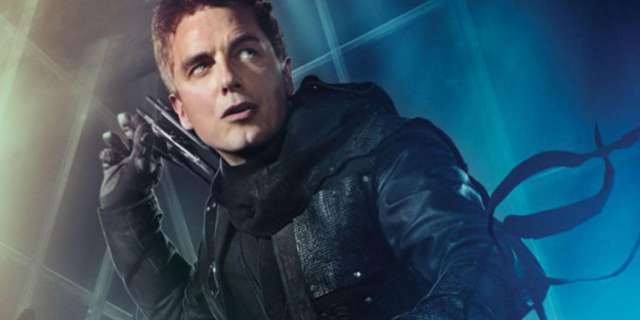 The final season of Arrow is turning out to be an epic affair for long running fans of the franchise, as many familiar faces are returning to aid in the farewell tour of Oliver Queen. And now series star Stephen Amell just revealed that one of the series’ greatest villains will once again appear for Season 8.

Amell appeared at Fan Expo Boston over the weekend in order to promote the last episodes of Arrow, and the actor let slip that John Barrowman would indeed be returning to reprise his role as Malcom Merlyn once again while referencing the actor’s epic 50th birthday party.

For those of you who are unaware, Amell made a promise to Barrowman before he turned 50 that he would deliver the actor’s birthday cake while wearing a tiny bathing suit. Amell made good on his promise in 2017, showing up to Barrowman’s festivities in a Speedo.

When asked by a fan if he would deliver another cake in a bathing suit for Barrowman’s 60th birthday, Amell spilled the news:

“It’s part of the deal, every ten years I put on a tiny suit and I deliver John Barrowman a birthday cake,” Amell said. “He’s back in the show in Season 8, and that was actually a rider that he put into his contract, so…”

While it’s exciting to know that Malcom Merlyn will be back in some capacity, along with many other returning faces, it’s still hard to deal with the fact that Arrow is actually ending very soon. But Amell sounds like he’s ready to move on, as he explained in a recent Q&A with fans on Facebook Live.

“I think that we’ve had our running time,” Amell said. “That’s what I thought when I talked with Greg Berlanti in Season 6. I felt like we had done our thing. I thought ultimately theoretically Season 7 should’ve ended things. But to come back and do 10 episodes … what they’ve done with this final season is really cool. It’s like nothing you guys have ever seen. Every episode that comes out, it’s like ‘Wait a minute, what? It’s happening what and where and how? Ok, that’s cool. Let’s do it!'”

As far as his future, Amell admitted at Fan Expo Boston that he already has his next gig lined up and that fans should learn what’s coming soon.

“I’ve recently closed on a new project that I’m really excited about that I am not allowed to talk about. It’s on TV,” Amell said. “I thought that the news was going to break last night, and I was kind of excited to talk about it today, but it’s for me… next question, next question. But something. Something very soon.”

The final season of Arrow will begin on Tuesday, October 15th at 9 p.m. ET on The CW