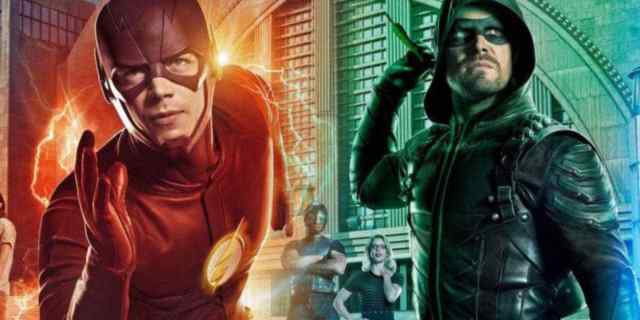 The CW’s Arrowverse is going to change in a major way this fall and no, we don’t mean just because of the upcoming Crisis of Infinite Earths crossover. Arrow, the series that started the whole universe of interconnected shows on the network, will end its run leaving The Flash, Supergirl, DC’s Legends of Tomorrow, and Batwoman to go forward without Oliver Queen. It’s an exciting prospect, but Arrow star Stephen Amell has just one request: don’t start calling the Arrowverse the Flashverse.

During the question and answer portion of his panel at Fan Expo Boston on Saturday, Amell was asked about the future of the Arrowverse without Arrow. While Amell was careful not to give away any spoilers — he deferred to the outcome of Crisis on Infinite Earths having a significant role in things, something fans are already anticipating — he did note that Grant Gustin’s Barry Allen/The Flash could become the central figure, but wanted to make sure the universe didn’t lose its Arrow-centric nickname.

“I think that kind of by definition once our show is done then in my opinion it… Grant (Gustin) as Barry Allen becomes the central point in the universe for sure and he’ll do a great job with it,” Amell said. “Just don’t start calling it the Flashverse … just keep calling it the Arrowverse. But you know, there will always be… we just happened to be first.”

What fans would call the Arrowverse post-Arrow is something that fans have considered for a little while. Soon after it was announced that Arrow would be coming to an end with Season 8, there started to be some speculation as to what the universe’s name might be going forward. There have been quite a few names suggested including “the Flarrowverse”, which has been kicked around pretty much since The Flash first debuted on The CW. Another frequently mentioned name option has been “The CWverse”. That one in particular has come up as recently as the network’s DC TV sizzle reel released back in July ahead of the network’s San Diego Comic-Con panels. The Flashverse has also been a popular re-naming option, though ultimately fans are likely to keep calling it the Arrowverse.

And maintaining the Arrowverse moniker would especially make sense considering that, while we know Oliver Queen’s fate thanks to Arrow‘s Season 7 finale — The Monitor (LaMonica Garrett) revealed that Oliver dies — there are still many other Arrow characters that could go on, something producer Marc Guggenheim touched on during Arrow’s Television Critics Association press tour presentation earlier this month.

“We’re always talking about it.” producer Marc Guggenheim explained. “Like, those conversations are always being had. There is nothing that, you know, has gone so far down the road that we’ve, you know — I wouldn’t certainly not going to announce it here. But all the showrunners talk, and stuff like that comes up all the time.”

“Right now, honestly, like, I think, you know, as far as Beth and the other showrunners of the shows, everyone is focused on launching their seasons, getting their season premieres finished, getting ready for the crossover.” Guggenheim added. “Everything sort of post-Arrow‘s life, you know, we’re going to have those conversations, but further down the road.”