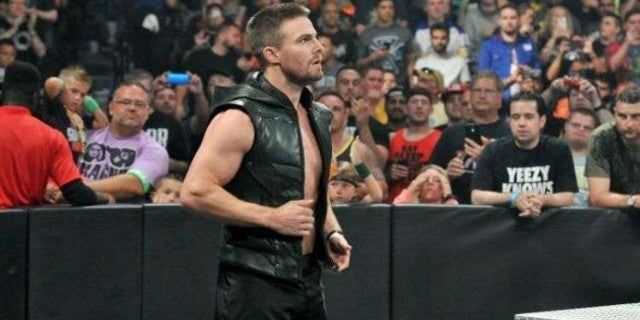 If you’re wondering what the next step in Stephen Amell‘s career will be after Arrow, you now have your answer. It’s been announced that Amell will be starring in Heels, a new hourlong drama that is set in the world of independent wrestling.

According to reports, Amell signing on to lead Heels is what led Starz to greenlight the series and commit to an initial eight-episode order. You can get the series synopsis and creative team details below, via Deadline:

“Written by Michael Waldron (Loki), with Mike O’Malley set as showrunner, Heels is about the men and women who chase their dreams in the world of small town pro wrestling. Set in a close-knit Georgia community, it follows a family-owned wrestling promotion as two brothers and rivals — one of them played by Amell — war over their late father’s legacy. In the ring, somebody must play the good guy and somebody must play their nemesis, the heel (Amell). But in the real world, those characters can be hard to live up to — or hard to leave behind.”

In the ring, Amell’s Jack Spade is the charismatic villain, or heel, of the Duffy Wrestling Association (DWA). In the real world, he’s its hard-working owner, a husband and father trying to make ends meet while fighting to realize his impossible dreams. He has the mind of an artist in the body of a warrior, and a Steve Jobs-ian need for perfection — and for control. He says he’ll do whatever it takes to build the DWA into an empire. Will he go so far as to risk his marriage, or his relationship with his brother?”

This series sounds like it will play on the same light/dark divide that was the central theme of Amell’s Oliver Queen, throughout Arrow‘s run. In the one sense, it’s probably good that the actor is hitting in his niche sweet spot, though for those who have criticized Amell’s acting in Arrow, this won’t be inspiring news.

Amell was ecstatic when first teasing fans about Heels. He could let people in on what the show was, at that time, but you can sure bet he’s out in front now, letting his fanbase know where he van be found next:

Heels is produced by Lionsgate TV and Paramount TV. No word yet on when Starz is aiming to air the series.