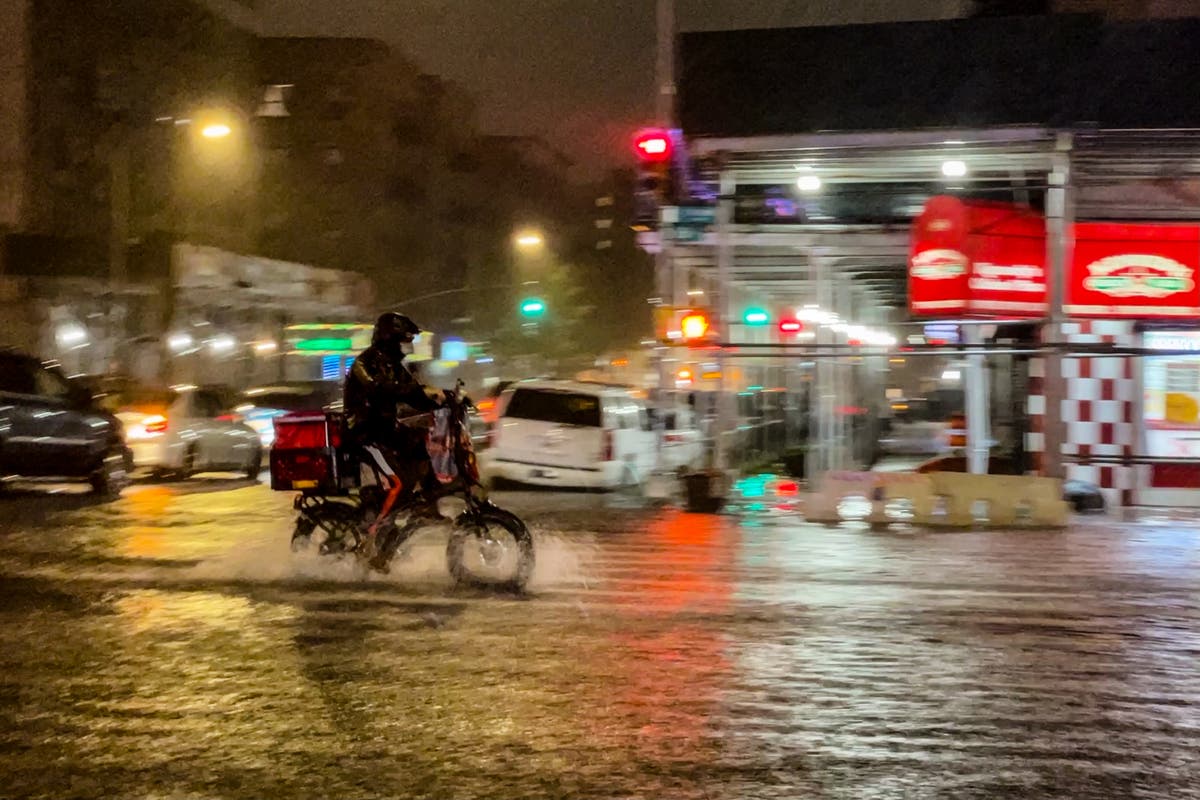 t least 14 people are dead after Hurricane Ida battered large swaths of the US.

People were killed in New York, New Jersey and Pennsylvania as basement apartments suddenly filled with water, rivers and creeks swelled to record levels and roads turned into car-swallowing canals.

Eight people died when they became trapped in flooded basements in New York City, including a two-year-old boy.

The ferocious storm also spawned tornadoes, including one that ripped apart homes and toppled silos in Mullica Hill, New Jersey, south of Philadelphia.

Water from record rainfall cascaded into New York City subway tunnels, trapping at least 17 trains and forcing the cancelation of service throughout the night and early morning.

On Thursday morning, the nation’s largest city was slow to recover from catastrophic flooding that was reminiscent of Superstorm Sandy in 2012.

The National Weather Service recorded 3.15 inches (8.91 centimeters) of rain in Central Park in one hour Wednesday night, far surpassing the previous recorded high of 1.94 inches (4.92 centimeters) that fell in one hour during Henri on August 21.

Scientists have warned such weather extremes will be more common with man-made global warming.

Major flooding along the Schuylkill River in Pennsylvania swamped highways, submerged cars and disrupted rail service in the Philadelphia area.

In a tweet, city officials predicted “historic flooding” on Thursday as river levels continue to rise.

The riverside community of Manayunk remained largely under water.

The rain in the tri-state area ended by daybreak Thursday as rescuers searched for more stranded people and braced for potentially finding more bodies.

“We’re enduring an historic weather event tonight with record breaking rain across the city, brutal flooding and dangerous conditions on our roads,” he said.

Police in Connecticut were investigating a report of a person missing due to the flooding in Woodbury.

In Passaic, New Jersey, a 70-year-old man was swept away after his family was rescued from their car.

Causes of death and identifications were pending.

Heavy winds and drenching rains collapsed the roof of a U.S. Postal Service building in New Jersey and threatened to overrun a dam in Pennsylvania.

In New York City, officials banned travel for all but emergency vehicles until early Thursday and warned against unnecessary travel into the morning.

The FDR Drive in Manhattan, and the Bronx River Parkway were under water during the storm.

Garbage bobbed in the water rushing down streets.

Some subway and rail service had resumed Thursday morning.

The National Weather Service office in New York issued its first-ever set of flash flood emergencies in the region Wednesday night, alerts only sent in the most dangerous conditions.

Officials said 370 flights have been canceled so far.

At least 220,000 customers were without power in the region, with most of the outages in New Jersey and Pennsylvania.

More than 35,000 customers were without power Thursday morning in New York City, Long Island and its northern suburbs.

Some students at Yale University in New Haven, Connecticut were forced to relocate from their dorms.

In Plainville, Connecticut, authorities said they used boats to rescue 18 people from a flooded neighbourhood.

A section of Route 24 in southeastern Massachusetts was shut down because of water on the highway.

In Portsmouth, Rhode Island, a road crumbled under the onslaught of rain.

The Atlantic hurricane season is far from over. Larry became a hurricane Thursday morning, forecast to rapidly intensify into a potentially catastrophic Category 4 storm by Sunday.

The National Hurricane Center in Miami said it’s moving west but remains far from any coast.