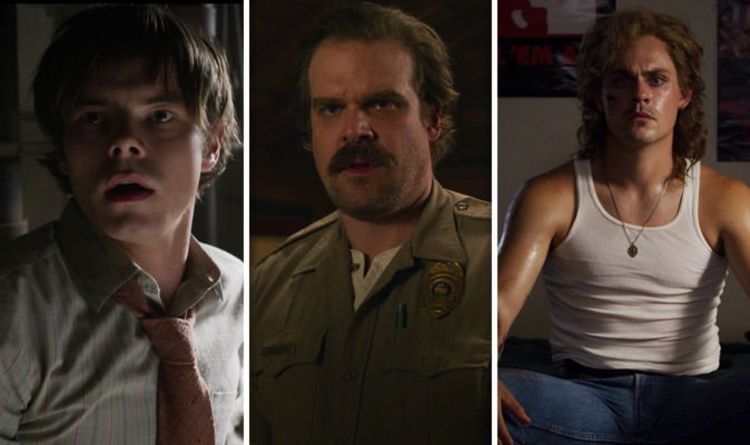 Stranger Things season three ended with a post-credit scene revealing the Russians had captured a faceless figure who they referred to as “The American”.

Fans will remember the shocking exit of two major characters, Jim Hopper (played by David Harbour) and Billy Hargrove (Darce Montgomery) as they both were presumed dead in the eighth episode entitled “The Battle of Starcourt Mall”.

However, there is hope one of the characters is alive and imprisoned by the Russians, but the question of which one is yet to be answered.

Many fans were quick to suspect The American was Hopper after he was left trapped in The Upside Down, believing he had ended up in Russia.

However, one Reddit user suspects it may be Billy who has been captured, meaning the character could still be alive after his shocking sacrifice in the season finale.

The user speculates Billy traded places with a clone of himself who he encountered in the season finale.

Xanshue said: “What if at the end of S3 the ‘American’ was Billy?

“When Billy went to the Upside Down he saw a clone of himself, perhaps they somehow switched places and Billy escaped by creating a new gate somehow.”

Moreover, the fan suggested this could also explain the presence of the live Demogorgon in the Russian lab.

However, unlike others, the fan wasn’t so convinced Hopper would make a comeback.

“Also, the ending of S3 (Hopper’s note), was really sad and I don’t think Netflix would just bring him back,“ they added.

“I would like for him to come back, but it doesn’t make a lot of sense.”

However, many users were not convinced Billy could be alive, one user added: “I’m pretty sure that seeing himself was just an illusion.

“He was taken over by the Mind Flayer” the user continued.

“If it was a clone, then Billy’s redemption scene when he stands up to the Mind Flayer to protect Eleven and the kids after being reminded of his mother on the beach makes no sense.”

A second added: “Yeah, I really want Billy to come back, but I have zero faith in that idea actually being true.”

The theory comes after Murray Bauman star Brett Gelman spoke to Men’s Health about the dramatic cliffhanger, speculating who the mysterious figure in the post credit scene could be.

He told the publication: “I think it’s JFK.