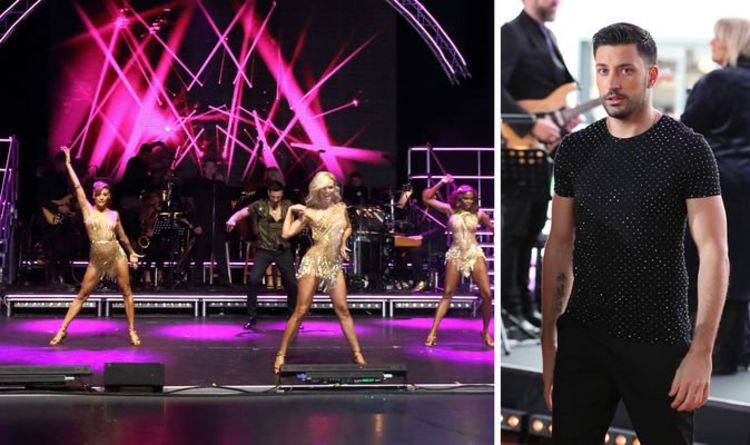 The new series of Strictly Come Dancing is going to be launching soon following the confirmation of the celebrity line-up. A total of 15 stars are taking part in the BBC series this year and all of them have their eye on the Gitterball Trophy. Strictly Come Dancing will be entering its 17th series this year and has become a well-oiled juggernaut since first airing nearly two decades ago.

Express.co.uk spoke exclusively to Strictly Come Dancing singer Lance Ellington to get all the info on what happens behind-the-scenes.

Ellington has been part of the show for 14 years and is going to be performing on the forthcoming series.

Among his highlights on Strictly have been singing Psy’s YouTube smash sensation Gangnam Style in its native Korean while Ed Balls performed or watching Anne Widdecombe flying across Elstree Studios over his head.

How are the songs chosen?

There’s a “pool of songs” producers choose from with a mixture of tracks both old and new.

Ellington explained that between the professional dancers who choreograph the routines and the producers, a song list is put together.

Generally, Latin routines are performed to traditional tracks in Spanish and Portuguese.

How long does filming go on for?

Singers only get the song list on Tuesdays and are tasked with learning up to 13 or 14 songs each week for the live show.

They’ll spend the week rehearsing before the live show on Saturday.

On the big day itself, they will be in the studio from the early morning until about 10pm on the live show.

The celebrities are likely to be in the studio for a similar length of time.

However, Ellington says it’s key that the singers get their parts right.

“For all of the celebrities, they rehearse their versions all week to a cut of the original song. The only time they hear the live version is on Saturday morning. So, we have to make sure the songs are as close as possible to the original,” he said.

READ MORE: Strictly Come Dancing: Who is the best couple ever with the most 10s?

Which songs are more likely to get high scores?

Ellington said the highest scores go to ballads a lot of the time. However, the production, lighting and staging were integral to the performance.

The singer commented: “You know the ones that always come together, where it’s the dance and the music and everything works together are the ones that really always stand out. It’s not always necessarily the traditional songs that work best.

“But I think if they’re doing a Paso or something like that then I think they use traditional music for that. I think it does really work. It really is sometime the whole thing that makes something very special.”

READ MORE: Strictly Come Dancing 2019 professionals: Who is in a relationship?

Why do songs get changed?

Songs have been changed at the 11th hour before if they’re really not working.

While the singers don’t really know why a song might get changed, it does happen.

Ellington said it was “very unusual” when a song did get changed.

Ellington says that athletes have generally fared quite well on the show over years because they have the stamina.

“But it boils down to whether they have the ability to learn something new,” he said as a caveat, saying that a lot of the celebrities would be out of their comfort zones.

“It will be interesting to see this year. I think there are some great characters,” he teased.