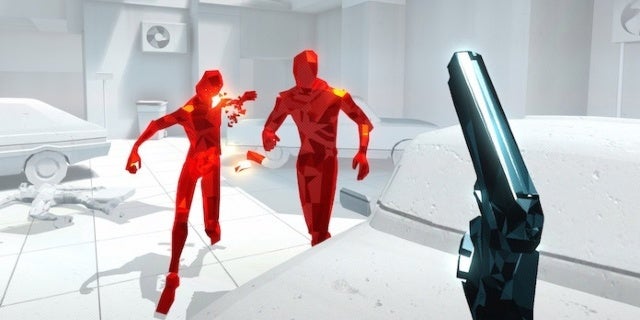 The Nintendo Indie World showcase dropped earlier today to reveal all of the glorious indie titles that will be making their way to the Nintendo Switch at some point in the future. However, not all of the games that were shown during the presentation have a wait before arriving on the popular portable console as they have already been released as of today. Two of the more notable titles that were revealed to be coming to the Switch today are Superhot and the Hotline Miami Collection, which should definitely be exciting for those with a Switch.

Both Superhot and the Hotline Miami Collection are available on the Nintendo Switch as of today via the eShop. Each title will present players with a plethora of action to enjoy anywhere they wish as the games become portable with the Switch. In case you are unaware of either of these titles, here’s more:

“Blurring the lines between cautious strategy and unbridled mayhem, SUPERHOT is the FPS in which time moves only when you move. No regenerating health bars. No conveniently placed ammo drops. It’s just you, outnumbered and outgunned, grabbing weapons off fallen enemies to shoot, slice, and maneuver through a hurricane of slow-motion bullets.

“With its unique, stylized graphics SUPERHOT finally adds something new and disruptive to the FPS genre. SUPERHOT’s polished, minimalist visual language helps you focus on what’s most important – the fluid gameplay and the cinematic beauty of the fight.”

The Hotline Miami Collection includes both brutally-challenging and neon-soaked Hotline Miami games and is available TODAY on #NintendoSwitch #eShop! #IndieWorld

Both Superhot and Hotline Miami Collection are available now on the Nintendo Switch.

What do you think about all of this? Are you excited to enjoy both of these games on the Nintendo Switch? Sound off in the comment section below, or feel free to hit me up over on Twitter @anarkE7!