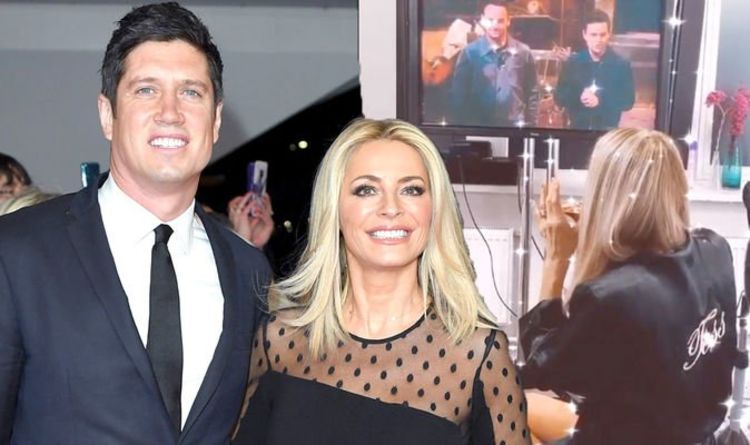 Tess Daly had no time to faff about after ending up her Strictly Come Dancing internet hosting duties final night time. The blonde bombshell, 51, had to be all ears quickly after wrapping up the BBC One dance present, as she rushed backstage to watch husband Vernon Kay on I’m A Celebrity… Get Me Out Of Here! 2020.

The dialog was sparked by Giovanna Fletcher recalling her marriage ceremony day when she tied the knot with McFly star Tom Fletcher.

She then went on to ask Vernon if he had ever renewed his marriage ceremony vows.

Vernon mentioned: “We have executed, we did it in France, about 5 years in the past.

“I booked a weekend in our favorite resort in the South of France and I spoke to her (Tess’) stylist at the time and I mentioned I wanted 4 attire.”

Vernon went on: “She didn’t know something. I mentioned I wanted 4 attire and I gave her a card and it mentioned, ‘Congratulations in your second marriage ceremony day,’ and I mentioned, ‘We’re going to renew our vows’.

“She mentioned, ‘I’ve bought nothing to put on,’ and I mentioned, ‘You say that… pick one’.”

Vernon continued: “We went to reception and her Mum, my parents, the kids and my brother were waiting and she was like ‘oh my god’ – we had such a lovely day.”

Later on in the Telegraph, Jessica gushed: “It’s unbelievable that Vernon organized in secret the renewal of his vows it’s like a fairy story.”