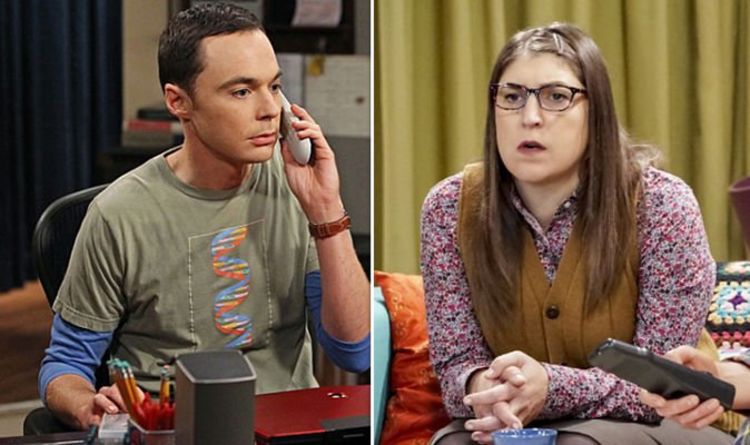 The CBS episode entitled “The Holographic Excitation” sees Sheldon surprise his girlfriend by agreeing to go to the Comic book store Halloween party in couples costumes.

The couple disagrees throwing back and forth different ideas, with Amy wanting to go as Romeo and Juliet but Sheldon on a completely different wavelength thinking of characters such as R2-D2 and C-3PO.

True to their characters, the scientists create a Venn Diagram of both their ideas in a move to create the perfect compromise.

However, Amy’s side reveals a clue fans may have missed.

On closer inspection, fans have begun to notice “Blossom and Joey” written down under Amy’s section of the Diagram.

Also listed was: Cinderella and Prince Charming, Antony and Cleopatra, Lady and the Tramp, Jack and Rose and Dharma and Greg.

Although the couple don’t end up choosing the costume, it makes reference to previous acting jobs played two members of the cast.

Fans may know what the Amy actress played Blossom Russo in the ‘90s sitcom of Blossom and Joey, listed on the character’s diagram.

Moreover, Leonard star Johnny Galecki was also part of the original cast, meaning the reference was no coincidence.

The season six episode is not the only reference to the sitcom as Leonard makes reference to it back in season one.

The Season one episode entitled “The Bat Jar Conjecture sees Raj (Kunal Nayyar) suggest “The girl who played TV’s Blossom” as a possible replacement to Sheldon on their physics Bowl team.

Could this have foreshadowed the star’s entrance in the season three finale of the CBS hit?

The easter-egg comes after the show’s director Mark Cendrowski revealed one major change he made to the show for the final episode.

In conversation with TV Insider, Mark said: “Because we knew all year [that this was] the last episode of the series, the whole way I approached things was to not let things get too heavy.

“It was going to be emotional enough. Since it was our 12th year, we treated it like our senior year of school.

“We did a lot of joking around. We did a yearbook. We did class photos. My intent was to keep things light and to enjoy this last season.”

“One of the things I did was we shot a little differently. I got an extra day of shooting, and we put the entire episode in the can before we did anything in front of the audience, which is something shows never do usually,” he said.

“That way, we could take our time with scenes and if it got too emotional or people were crying or upset, we fix the makeup, redo it, talk about it, and get the right attitudes to shoot the show.”

The Big Bang Theory season 12 is available on CBS and All4.