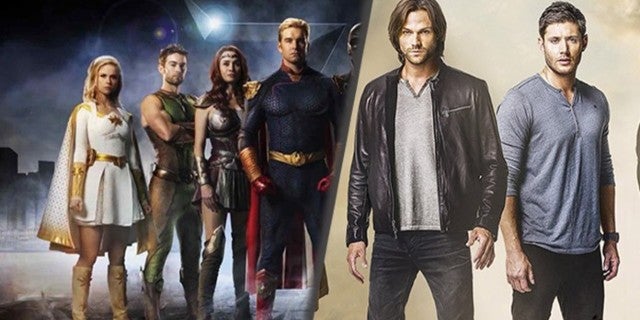 The Boys has proven to be a major hit for Amazon Studios with the adaptation of the Garth Ennis and Darick Robertson comic of the same name coming in as one of the service’s most-watched shows, but it isn’t just a bold, sharp, frequently brutal tale about a world in which superheroes are superstars but not exactly decent people that viewers are getting to enjoy when they watch the first season. Tucked into the Season 1 finale is an interesting nod to series co-creator and executive producer Eric Kripke‘s other hugely popular television series: The CW’s Supernatural.

In The Boys‘ Season 1 finale episode, “You Found Me”, Madelyn Stillwell, Vought Senior Vice President played by Elisabeth Shue, has a meeting with Secretary of Defense Robert Singer. It’s a necessary meeting. Islamic State now has Compound V, thus allowing them to create super-powered terrorists and now, only Vought has the ability to fight those terrorists as they are the company who has the super powered heroes. While there’s a lot to unpack about that meeting — Supernatural fans will no doubt notice something interesting about the Secretary of Defense. He’s played by Jim Beaver, the actor who also plays surrogate father-figure to the Winchester brothers, Bobby Singer. Fans may also have noticed that the Easter Egg goes a little deeper than just Kripke having Beaver appear in The Boys. The real Easter Egg? The characters’ names: Robert Singer on The Boys and Bobby Singer on Supernatural.

It’s a pretty clever Easter Egg, but it’s also not the only one Kripke has tucked into The Boys nor will it be the last one. During a recent Reddit AMA (via CBR) Kripke noted that there were other cameos from his previous shows that fans might have overlooked as well as promised more to come.

“For fans of Revolution and his overall brilliance, Giancarlo Esposito will be back [for Season 2],” Kripke explained. “For Timeless fans, Malcolm Barrett will be back, and Claudia Doumit will be joining up! When I find actors who I love — and who are just cool f***ing people — I try to use them over and over.”

He also confirmed that Beaver will return for the The Boys‘ second season as well, and when it comes to that second season production is already underway and it’s one that executive producers Seth Rogen and Evan Goldberg have teased will be bigger and bloodier than the first.

“They already have more resources for the second season,” Rogen said during an interview with Collider. “They’re adding more characters, the scope of the show organically grows as the show continues. We just watched, actually, the first episode of the second season this week. It was a wonderful thing as producers. This is way better than I ever could’ve hoped it would be.”

The Boys Season 1 is now available to stream on Amazon Prime Video.