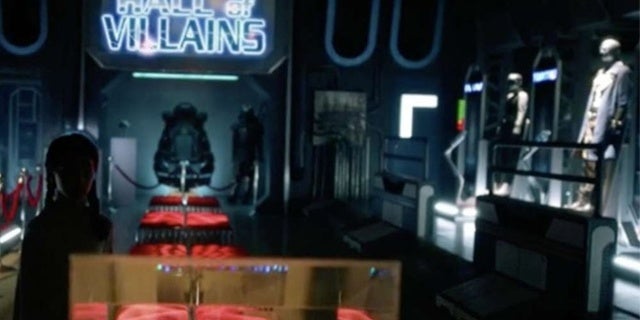 The Flash‘s Danielle Panabaker is stepping behind the camera again for The CW series’ sixth season this fall after having made her directorial debut with last season’s “Godspeed”, giving fans not only an origin story for Nora West-Allen, but featured The Flash Museum’s Hall of Villains as well. Now, thanks to a behind-the-scenes photo the Killer Frost actress has shared on social media, it seems like the infamous museum exhibit may just be back for Season 6.

In a recent post on Instagram, Panabaker shared a photo of the Hall — specifically off The Thinker’s display — with a curious caption: “Who me?!” Check it out below.

The photo is an interesting tease on a few levels. First, it seems to hint that the future will play some sort of role in Season 6 — even if only in the context of the timeline of things having moved up, as was teased during the Season 5 finale when the date on the “Crisis” newspaper moved from 2024 to 2019. With the Hall of Villains having been introduced as a feature of the future, it wouldn’t be too much of a stretch to see the Flash Museum come into being earlier as well. There’s also the tease that maybe Killer Frost will have her own display in the Hall of Villains, suggesting that we could see a dark turn for Caitlin and her alter ego.

That possibility for a dark turn is one that is especially interesting. Panabaker’s Caitlin Snow will have a significant tie to the first big bad of Season 6, Ramsey Rosso/Bloodwork (Sendhil Ramamurthy.) A brilliant physician and former colleague of Caitlin Snow, Rosso’s attempt at rekindling their relationship quickly goes wrong, taking Rosso on a dark path to become the most chilling villain Team Flash has ever faced, turning him from an old friend to the monstrous Bloodwork. While it’s entirely speculation at this point, it wouldn’t be terribly difficult to imagine Rosso’s turn having an impact on Caitlin, possibly one that leads her down her own dark path.

There’s also the chance that the events of “Crisis on Infinite Earths” could see a shift in Killer Frost as well. The Flash is set to have two separate Big Bads in Season 6 and showrunner Eric Wallace has previously said that the second half of the season will deal with the fallout of “Crisis” — as well as give the season a freshness that is unexpected.

“We found really unique ways to make the season fresh that we never expected, thanks to ‘Crisis,’” Wallace revealed. “This season is really divided up in a way that the episodes before the crossover are pre-‘Crisis’ episodes. Then the back half of the season is all about dealing with the fallout from the events of ‘Crisis.’”

The Flash‘s sixth season kicks off Tuesday, October 8th at 8/7c on The CW.