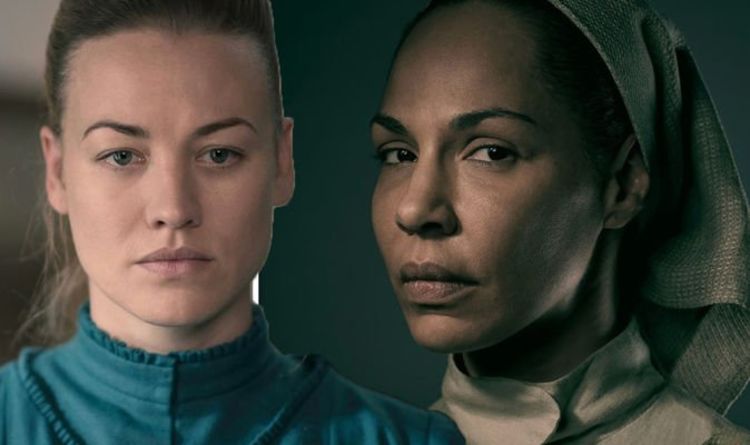 The Handmaid’s Tale has not pulled any punches throughout its three seasons.

While it looked like Serena Joy (played by Yvonne Strahovski) and Fred Waterford (Joseph Fiennes) were going to get away with all they had done in the past, they were eventually detained in Canada.

Despite this, Serena was eventually left to roam Canada, allowing her to think she had gotten away with it.

Unfortunately for her, Fred was not willing to go down alone, and informed the Canadian government of Serena’s crimes, prompting her arrest.

With season four presumably on its way to TV screens in the next year, fans have no other choice but to predict the downfall of Serena in the coming episodes.

One fan has put together a comprehensive list of events that are likely to happen in the first jump into the next season, including what will happen to Serena after being arrested.

Reddit user NickofSantaCruz recently wrote: “Cold open on Serena getting deposed, not understanding how she lost immunity. As the lawyers break it down for her, she gives the camera that fourth-wall-breaking stare and in voiceover narration says: ‘All I wanted was a child.’”

The user then goes on to predict Serena will have a bigger part to play in the fourth season, and even takes over as the protagonist for a few episodes.

However, despite becoming a bigger focal point for the show, the user predicts Serena will eventually be sent to prison for a long time for her crimes by the testimony of one minor character.

READ MORE: The Handmaid’s Tale: Will the children survive outside of Gilead?

They wrote: “In conjunction with those three main focuses, Rita [Amanda Brugel] and Emily [Alexis Bledel] will have scenes with the ICC lawyers refuting or substantiating the Waterfords’ testimonies.”

Rita has been on the side of the handmaids since the rise of Gilead, however she has always been quite restricted in what she could do to help them.

Aiding the Canadian government in putting Serena away for good could be the final way she helps out the handmaids before getting away from the entire situation.

Meanwhile, other fans of the show have been theorising Aunt Lydia (Ann Dowd) will be the one to save June (Elisabeth Moss) next season.

A Reddit user proposed: “By Episode 4, we’ll track back to June and the fate of her friends.

“She’s getting care at a regular hospital by order of Lawrence. The Commanders all want her to die, but Aunt Lydia argues that more children are needed now after the abduction and that June still retains a functioning womb.

“That episode ends with June’s mouth getting ringed closed. (it’s only temporary, as something will happen later and Lawrence will have the procedure undone).”

Aunt Lydia has shown some strange changes in her character throughout the show so far, and although she has not always been on June’s side, she may eventually come back to help her.

But if she does, will she inevitably be arrested and put away for her crimes as well?

The Handmaid’s Tale season 3 is now available to stream on Hulu.