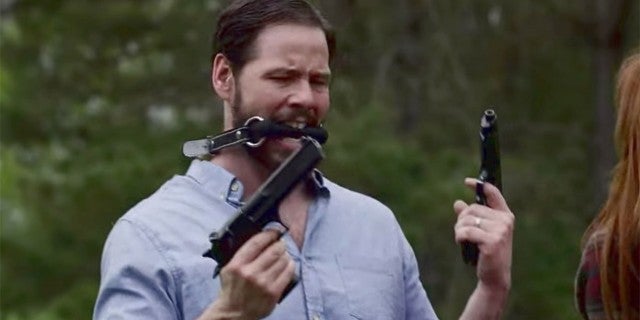 The Hunt is quickly becoming one of the most infamous movies never to be released in theaters. The horror/thriller from Blumhouse Productions drew massive backlash when test screenings revealed it to be a politically-themed satire about America’s current culture wars. Following a weekend of multiple mass shootings, The Hunt‘s premise of people hunting other people became a non-starter for Universal Pictures, and the film was pulled from its September release slate.

There’s already been an in-depth breakdown of how The Hunt fell apart at the marketing stage. Now, the film’s director, Craig Zobel, is stepping up to defend his film, claiming that all the backlash over The Hunt is misplaced outrage.

As Zobel explained to Variety, the first thing he wants to do is make it clear that all the buzz about The Hunt being a movie about demonizing right-wing “deplorables” is totally off the mark:

“I wanted to make a fun, action thriller that satirized this moment in our culture — where we jump to assume we know someone’s beliefs because of which ‘team’ we think they’re on… and then start shouting at them,” Zobel wrote in response to email questioning. “This rush to judgment is one of the most relevant problems of our time.”

Indeed, it seems that the current socio-political climate is now so charged that even attempting something like satire is (near?) impossible. Satire requires looking beyond the surface view of things to absorb the deeper irony being presented – the irony here being Zobel at once know that the culture is too brash and judgemental, yet still thinking he could rise about it all with his film.

In all fairness, though, timing is everything in a case like this. The blowback from political groups may have been just the thing to give The Hunt a major boost in visibility and viewer intrigue, but when those same political ideas eventually fed into mass violence, the satire got a little too real.

The studio understandably feared public backlash, as well as possible violence against the filmmakers (who did receive threats), not to mention screenings of the film being a possible target for mass violence, as well. For his part, Zobel acknowledges that circumstances made the delay all too necessary:

“I was devastated by going to sleep to El Paso and waking up to Dayton,” he wrote. “These types of moments happen far too often. In the wake of these horrific events, we immediately considered what it meant for the timing of our film. Once inaccurate assumptions about the content and intent of the movie began to take hold, I supported the decision to move the film off its release date.”

Still, in case any of that misconception is still lingering, Zobel wants to make it clear, in no uncertain terms, that The Hunt has no overriding political bias or agenda:

“Our ambition was to poke at both sides of the aisle equally,” he wrote. “We seek to entertain and unify, not enrage and divide. It is up to the viewers to decide what their takeaway will be.”

The Hunt has no confirmed release date at this time.