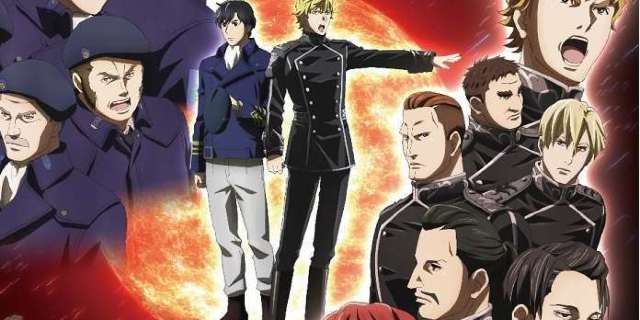 The Legend of Galactic Heroes is one of those anime that can tend to get overshadowed by some of the bigger properties, flying out for hungry anime fans faster than ever before. The sci-fi anime series however has managed to make a decent niche for itself, luring in fans to its power struggle since its inception in 1988 in anime form, and with its novels that were originally created in 1982 from series creator Yoshiki Tanaka. Now, to follow up the recently released television series, the franchise will be continuing in a trilogy of films that are dropping this fall, promising to deliver the star crossed battles that the series is known for.

Twitter User PKJD8I8 shared the newest poster that displays the cavalcade of characters that populate the upcoming trilogy, with each film premiering in September, October, and November respectively:

While each of the films will be released in Japan to start, with each installment being the equivalent of four episodes of an anime series if it were released in a television format, we’re sure that it will eventually make its way to the west sooner rather than later considering the hunger for anime properties in general. While this series may not have insane mech suits or magical energy beams, The Legend of the Galactic Heroes does create interesting scenarios and character studies throughout its long running franchise.

What do you think of the latest poster for The Legend of the Galactic Heroes: The New Thesis – Stellar War? Feel free to let us know in the comments or hit me up directly on Twitter @EVComedy to talk all things comics, anime, and Galactic Heroes!

For those unfamiliar with The Legend of the Galactic Heroes, the series was first created by Yoshiki Tanaka in 1982. Starting life as a series of science-fiction novels that follow Reinhard von Lohengramm and Yang Wen-li, two rivals rising in power on the opposite sides of an interstellar conflict far in the future. Most fans of the series will recognize it for its first anime series, which ran from 1988 to 1997, and for its many video game, manga, and OVA adaptations.

On today’s episode, we’re talking the latest Pokemon TCG news and Kingler’s rise in Pokemon Go. We’re also looking into the big new Pokemon game – all that in today’s episode of A Wild Podcast Has Appeared! Make sure to subscribe now to never miss an episode!