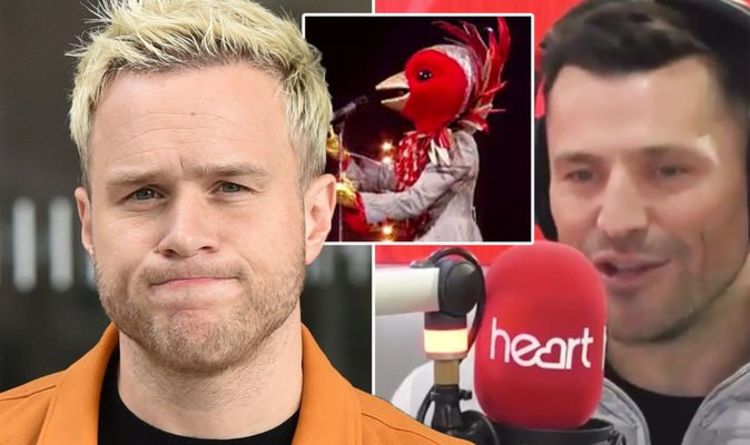 The Voice decide Olly Murs has emerged as some of the fashionable guesses amongst ITV viewers for The Masked Singer’s Robin in current weeks because of the disguised act’s show-stopping performances. Renowned for his singing vocals and charismatic stage presence, Olly seems to suit the invoice – one thing Heart radio host Mark Wright was eager to place to the singer on his show right this moment. However, as an alternative of getting a solution, Olly hung up the telephone to keep away from any additional grilling on the topic, sending the hearsay mill into meltdown.

So far on The Masked Singer, guesses for Robin from the judging panel have ranged from boxer Amir Khan to EastEnders’ Dean Gaffney to chart-topper Bruno Mars.

However, it’s former X Factor finalist Olly who appears to be some of the fashionable doable culprits performing underneath Robin’s disguise with followers.

And regardless of initially denying the rumours to pal and former TOWIE star Mark on his radio show on Thursday, the host was left satisfied he’d caught him out by getting him to carry out a rendition of Justin Timberlake’s Can’t Stop the Feeling – the identical music Robin carried out on Saturday.

Olly confirmed he did, including: “It’s on before The Voice, it’s the support act for the main show.”

The pair shared amusing earlier than Mark admitted he too has had quite a few tweets from followers asking if it’s him behind the Robin masks.

However, the Heart radio host had a concept of his personal that it was as an alternative Olly performing.

“You are favourite [with the bookmakers] to be the Robin,” Mark knowledgeable his pal. “And there’s a reason that makes sense because people say me and you sound like each other.”

However, a couple of moments later, Mark then performed a clip from Robin’s efficiency of the identical music to match the 2 vocals.

Adamant he might hear similarities between Olly and Robin, Mark requested The Voice decide to carry out the hit yet another time.

Olly, nevertheless, had different concepts as he replied: “Mate, I’ve got to go, sorry.”

Listeners heard Olly put the telephone after coming underneath the microscope by Mark, because the Heart host joked: “We’ve stitched him!”

“I think we’ve got him,” Mark excitedly stated to his listeners – however is Olly actually the one underneath Robin’s masks?

Quite a few followers appear to suppose in order a number of replied to Heart’s official Twitter account applauding Mark’s detective abilities.

“Oh, Mark what have you done? [cry laughing emoji],” one fan replied, with a second including: “Well played mate [wink emoji].”

Fans should wait till Robin is unmasked on the ITV show to search out out for certain.