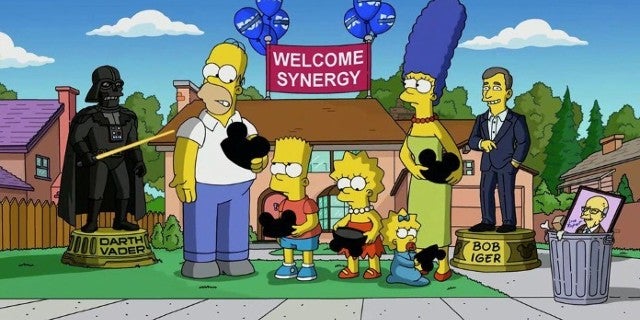 Disney is really feeling itself these days, having amassed one of the most formidable media conglomerates in history. The studio has been entertaining fans (and annoying critics) with teases of all the different franchises (Marvel, Disney Animation, Pixar, Star Wars) that are now under the Mouse House roof.

Case in point: Check out this tweet from the social media account for the upcoming Disney+ streaming service, which was so shameless in in its name-brand bragging that it got sniped by none other than The Simpsons:

It’s barely 9:00 am and we already found Dory, assembled the @Avengers, and got @StarWars and @Marvel to tweet at each other. NBD just the most ambitious crossover event in history.

“It’s barely 9:00 am and we already found Dory, assembled the @Avengers, and got @StarWars and @Marvel to tweet at each other. NBD just the most ambitious crossover event in history.” –Disney+

Of course, The Simpsons is now owned by Disney as part of the Disney-Fox merger, but that hasn’t stopped the show’s creative team and/or social media managers from having some good fun at their corporate overlords’ expense. Then again, it wouldn’t be at all surprising to learn that there’s one person or small team of people all sitting in the same room running these accounts in tandem, and that any perceived resistance from one branch, is actually just the Disney providing an illusion of freedom.

Right now, anticipation is high for the Disney+ streaming service – especially now that Disney will be able to also offer 20th Century Fox programming. The latest headlines were made when it was announced that Disney+ will be bundled with Hulu and ESPN+ when it is initially launched, and that the bundle will only be priced at $12.99 a month. The bundle will save subscribers of all three services nearly $5 a month on their streaming budget – although the initial bundle will have only support ad-based versions of Hulu and ESPN+, with no clear indication if ad-free options are on going to be offered.

“Our play… is to have general entertainment, we’ll call it Hulu, more family-like entertainment which is Disney+ and sports,” Disney CEO Bob Iger explained to investors. “And that bundle that we’re creating, that $12.99 bundle where you can buy all three, offers consumers tremendous volume, tremendous quality and tremendous variety — for a good price.”

Disney+ is expected to launch later this year.