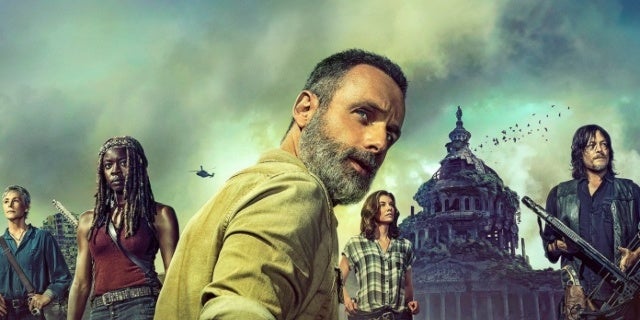 The cast and crew of The Walking Dead pay tribute to Rick Grimes star Andrew Lincoln in a bonus feature included on the Season 9 Blu-ray.

“Andy Lincoln makes every moment that you’re with him the best moment of your life,” longtime executive producer Gale Anne Hurd says in the clip exclusively revealed by EW. Aaron star Ross Marquand adds Lincoln, who exited the television series in the first half of Season 9, “was and will forever be the leader of this show.”

“Everybody knows he’s like one of my best friends ever,” says Daryl star Norman Reedus. “I would talk to Andy on the way to set, as soon as we got back in the car, I was talking about the day. He ate lunch in my trailer every day for nine years.”

For Danai Gurira, whose Michonne is the mother of Rick’s children, her seven-season collaboration with Lincoln “made coming to work really, really awesome.” She adds of Lincoln’s presence, “It was connection, it was community, it was generosity, it was respect.”

“He has that impact on absolutely everyone,” adds Hurd.

The Walking Dead showrunner Angela Kang, who was tasked with writing its longtime lead out of the series, said in a 2018 Season 9 preview special on Talking Dead Lincoln is “one of the loveliest, best human beings you could ever meet. We all love him so much.”

The “incredible leader” and “incredible actor” deserved a sendoff that Kang was determined to get right.

“I want to do service to this character,” she said in August 2018. “The writers, and everybody, the crew, the actors, everybody’s just putting their all into it because we love him so much and we respect him so much, and we want to do service to that journey. I feel a great responsibility to the fans to try to write him out in a way that’s worthy of his character, so I hope that we accomplished that.”

Lincoln’s final episode, “What Comes After,” pit a bloodied Rick against a closing-in herd of walkers and brought back Shane (Jon Bernthal), Hershel (Scott Wilson) and Sasha (Sonequa Martin-Green) as wound-induced hallucinations.