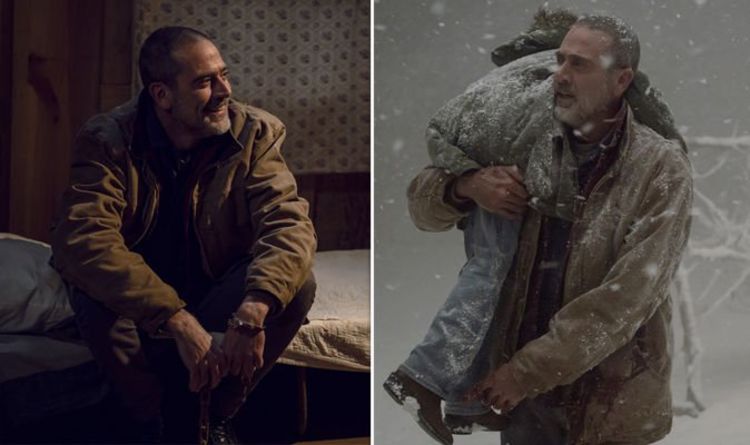 The Walking Dead‘s Negan (played by Jeffrey Dean Morgan) wasted no time in launching an attack on the Survivors, killing off several beloved characters the fandom longs to see a return of to this day.

Fans will remember the Season eight episode of the AMC series that saw Negan come head to head with the survivors, but Rick Grimes (Andrew Lincoln) decided to let the cold blooded leader live behind bars.

However, it seems the next outing will see the baseball bat wielding villain walk free to take his next victim.

Showrunners recently revealed they will be bringing the comic book character of Brandon Rose to screens next season in an image release showing the pair together.

Fans of the comic books will remember Brandon was introduced in issue 131 along with Maggie Rhee’s love interest Dante.

However, the newcomer met his ending in issue 153 at the hands of Negan after Brandon busts him out of jail.

The comic books saw Brandon enraged at Rick after failing to retaliate after his mother was killed by the Whisperers.

Wanting Rick to pay for the death, he busts out Negan in hope it will lead to his demise.

However, after Brandon played his part, Negan was quick to dispose of him in the comics, stabbing him in the heart.

With Rick being pictured out of jail in the next outing, surely this confirms Brandon busted him out and could meet the same fate?

The spoiler comes after a deleted scene from series nine revealed why Rick kept Negan alive.

In the scene with Carol Peletier (Melissa McBride), which appears on the Blu-ray DVD release, Rick explains he had to honour those killed in the apocalypse.

As they walked through he woods, he told her: “Every day since I put Negan in that cell, I have this moment, usually right when I wake up, this feeling that I should go down there and kill him, [and] to keep going and finish them all [the Saviors].

He went on to add: “But then I remember everyone we’ve lost, not just to the Saviors, but the whole way.

“And I know I need to honour them, to build life. Not take it.

“Because it’s us or the dead and every life counts now.”

However, the next outing could see Rick regret sparing Negan if the show follows suit of the comics and sees the villain escape.

Will Rick still want to spare Negan if he takes yet another life?