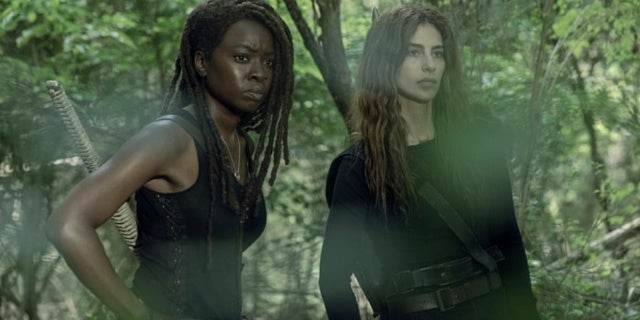 Walking Dead star Nadia Hilker admits her childhood crush on Lois & Clark: The New Adventures of Superman star Dean Cain led to a memorable encounter with the actor during a recent comic convention.

“I’m probably regretting it, but I’m gonna tell it anyway,” Hilker told The Los Angeles Times at San Diego Comic-Con when talk of cosplay reminded of her “big crush.”

“I would always, I don’t know why, I would always open the window in my parent’s bathroom when I peed. And I would welcome him. I would ask for [Superman] to come and get me, I don’t know why,” Hilker said. “And then I did a comic [convention], and he was there. Then I got really nervous and we did this group photo, and I just told him — I can’t tell the entire story — no, I can’t say that. But I actually told him in that moment, I was like, ‘When I was young, I opened my bathroom window and I peed and I was hoping you would come and get me.’”

When Hilker’s co-star Norman Reedus asked if Cain got her number, Hilker said, “No, I was disappointed by his reaction. I think… no. Did I just say…? No, I didn’t say that. He was really confused, he was very confused by that.”

“I really hope so,” Hilker said at Walker Stalker Con New Jersey in late 2018. “Because even myself, I don’t know — I mean, I kind of have a sense of what went down — but it’s pretty much on the writers whether they want to give me that backstory. But fingers crossed, right? I think we all should find out.”