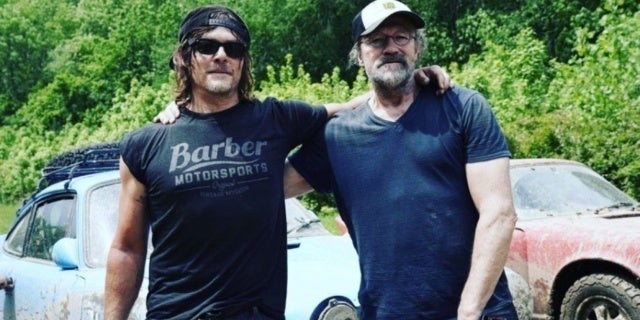 “Season 3 was a blast — we had a ton of fun traveling the world and the U.S. with some really awesome guests,” Reedus mentioned in a press release when AMC renewed the unscripted collection for its fourth season earlier in 2019. “We’re looking forward to turning that up even further for Season 4. I can’t wait for everyone to see it all.”

Last season noticed Reedus reunite with former TWD co-star Andrew Lincoln (Rick Grimes) for a journey by England, Steven Yeun (Glenn) within the Bay Area of California and Austin Amelio (Dwight) within the Valley of the Sun, Arizona. Season three additionally noticed appearances from Reedus’ co-stars Jeffrey Dean Morgan (Negan) — who appeared alongside Lincoln — and Melissa McBride (Carol) for a journey throughout Scotland.

“I believe Season three of Ride is the one to beat. It’s by far the most effective season we’ve ever finished,” Reedus beforehand instructed AMC. “It took three seasons to capture what the show was. We started off in the first season and it was more like a gearhead show, like ‘This is a so-and-so motorcycle made by so-and-so with so-and-so parts.’ Then the second season, the hype of the show got out, and wherever we would go, we just got swarmed by people. And then we just started incorporating that into the show because that’s part of it. That’s part of what we’re experiencing and we wanted people to feel like they were with us, doing what we were doing, and since that happened everywhere we went, we just started including it. Then with Season 3, we threw all caution to the wind and just had a really good time, and you can tell.”

In Season 4, Reedus and his celeb visitors are “going to Uraguay, we’re going to Costa Rica, we’re going to a whole bunch of cool spots with a bunch of good guests,” Reedus instructed Extra in February. Reedus additionally named celebrity Cher as his dream visitor.