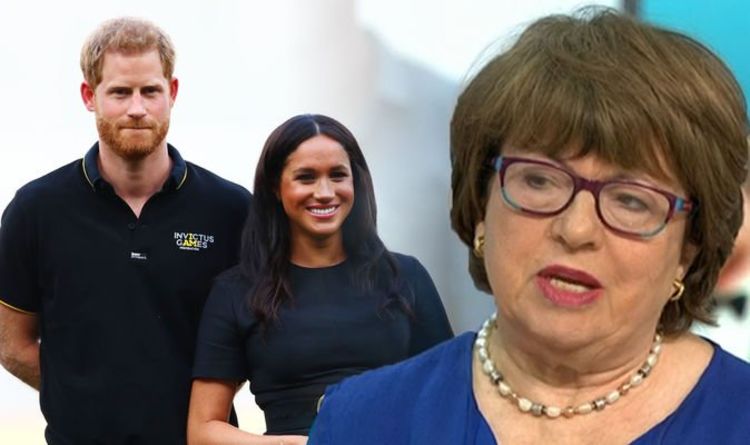 Meghan Markle and Prince Harry have been at the centre of a controversy over the past week for their transportation use.

The Royal couple have recently flown to Ibiza and Nice on private jets, but they have faced backlash for the negative effects the aircrafts are said to have on the environment.

It’s thought the planes have a seven-times the carbon footprint as a commercial flight and considering Harry and Meghan’s stance on tackling climate change, the flights have been criticised heavily.

Two royal experts appeared on Good Morning Britain today to chat to Ranvir Singh and Richard Bacon about the furore surrounding the couple and how Elton John recently leapt to their defence.

Michael Cole and Angela Levin were quick to comment on Meghan and Harry, with the latter saying they can’t escape public criticism.

The author said: “If someone pays for [the flight] it doesn’t justify you flying.

“If you want privacy and you set up an Instagram and tell us what to think and what to do, you can’t get away with it.

“Every day there’s a new post but because they won’t let the press in, you can’t get away with it.”

Richard hit back, saying: “But they’re trying to get positive messages out there.”

Angela replied: “They’re not that irrational really, they’re not being royal, they’re being showbiz.”

Michael, a former BBC journalist and PR, added: “It’s a major error from a public relations point of view.”

READ MORE: ‘Back off Meghan Markle’ Denise Welch rips into Piers Morgan over treatment of Duchess

Richard commented: “In this particular place they were staying at Elton John’s place (in France). If that offer was made, you are probably going to say yes…”

Michael hit back: “Yeah, well that’s a big mistake. Don’t take favours from rich people – that puts you in obligation of being in favour to them.”

The former expert added: “Stay clear of this. Look them in the eye.

“You can be born royal but it’s best to be born with common sense.”

Yesterday on Lorraine, royal expert James Brooks said Meghan Markle and Prince Harry “want to have their cake and eat it”.

He shared to Christine Lampard: “It was to celebrate Meghan’s 38th birthday. They spent around, just under, a week there – nice, luxurious villa.

“Then they come back, and they take another private jet to Nice in the south of France.

“Now, it’s one of those where it’s not necessarily an issue if you’ve got the name and the status to do it.

“Unfortunately for these two, they’re telling people, ‘Well, cut down your carbon footprint and try to be more environmentally friendly’. And then they’re pictured on these huge jets where the carbon footprint is massive.

“But these two want to almost have their cake and eat it,” James concluded.

Good Morning Britain airs weekdays on ITV from 6am.