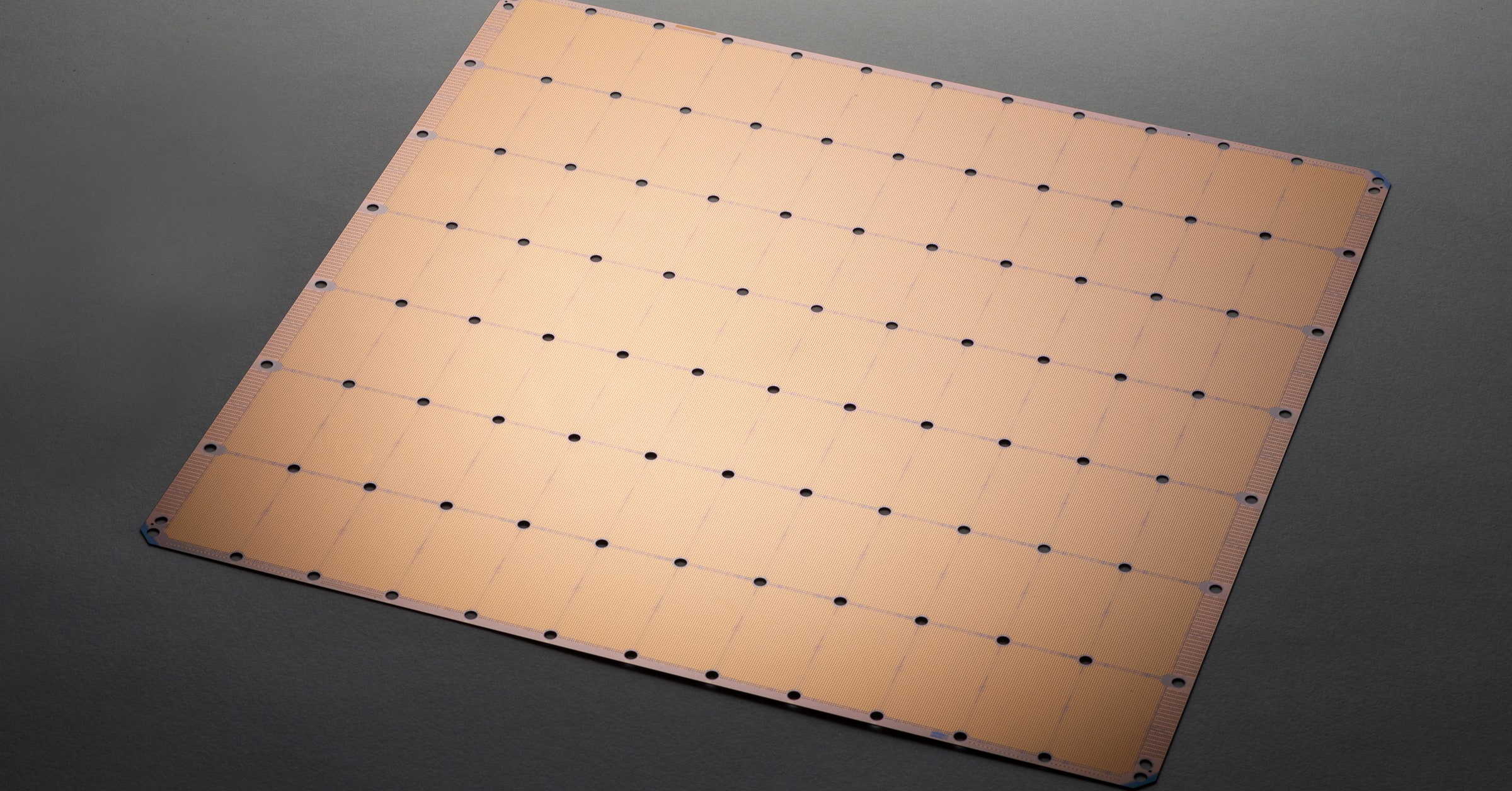 Computer chips are usually small. The processor that powers the latest iPhones and iPads is smaller than a fingernail, and even the beefy devices used in cloud servers aren’t much bigger than a postage stamp. Then there’s a new chip from startup Cerebras: It’s bigger than an iPad all by itself.

The silicon monster is almost 22 centimeters—roughly 9 inches—on each side, making it likely the largest computer chip ever, and a monument to the tech industry’s hopes for artificial intelligence. Cerebras plans to offer it to tech companies trying to build smarter AI more quickly.

Eugenio Culurciello, a fellow at chipmaker Micron who has worked on chip designs for AI but was not involved in the project, calls the scale and ambition of Cerebras’ chip “crazy.” He also believes that it makes sense, because of the intense computing power demanded by large scale AI projects such as virtual assistants and self-driving cars. “It will be expensive, but some people will probably use it,” he says.

The current boom in all things AI is driven by a technology called deep learning. AI systems built on it are developed using a process called training, in which algorithms optimize themselves to a task by analyzing example data.

The training data might be medical scans annotated to mark tumors or a bot’s repeated attempts to win a videogame. Software made this way is generally more powerful when it has more data to learn from or the learning system itself is larger and more complex.

Computing power has become a limiting factor for some of the most ambitious AI projects. A recent study on the energy consumption of deep learning training found it could cost $350,000 to develop a single piece of language processing software. For-profit AI lab OpenAI has estimated that between 2012 and 2018, the amount of computing power expended on the largest published AI experiments doubled roughly every 3 1/2 months.

AI experts yearning for more oomph typically use graphics processors, or GPUs. The deep learning boom originated in the discovery that GPUs are well suited to the math underpinning the technique, a coincidence that has boosted the stock price of leading GPU supplier Nvidia eight-fold in the past five years. More recently, Google has developed its own AI chips customized to deep learning called TPUs, and a raft of startups have begun work on their own AI hardware.

To train deep learning software on tasks like recognizing images, engineers use clusters of many GPUs wired together. To make a bot that took on the videogame Dota 2 last year, OpenAI tied up hundreds of GPUs for weeks.

Cerebras’ chip covers more than 56 times the area of Nvidia’s most powerful server GPU, claimed at launch in 2017 to be the most complex chip ever. Cerebras founder and CEO Andrew Feldman says the giant processor can do the work of a cluster of hundreds of GPUs, depending on the task at hand, while consuming much less energy and space.

Feldman says the chip will allow AI researchers—and the science of AI—to move faster. “You can ask more questions,” he says. “There are things we simply haven’t been able to try.”

Those claims are built in part on the Cerebras chip’s large stocks of onboard memory, allowing the training of more complex deep learning software. Feldman says his oversized design also benefits from the fact that data can move around a chip around 1,000 times faster than it can between separate chips linked together.

Making such a large and powerful chip brings problems of its own. Most computers keep cool by blowing air around, but Cerebras had to design a system of water pipes that run close by the chip to prevent it from overheating.

Feldman says “a handful” of customers are trying the chip, including on drug design problems. He plans to sell complete servers built around the chip, rather than chips on their own, but declines to discuss price or availability.

To construct its giant chip, Cerebras worked closely with contract chip manufacturer TSMC, whose other customers include Apple and Nvidia. Brad Paulsen, a senior vice president at TSMC who has worked in the semiconductor industry since the early 1980s, says it’s the largest chip he has ever seen.

TSMC had to adapt its manufacturing equipment to create such a large continuous slab of working circuitry. Fabs, as semiconductor factories are known, make chips from circular wafers of pure silicon. The usual process places a grid of many chips onto a wafer and then slices the wafer to create the finished devices.

Modern fabs use wafers 300 millimeters, about 12 inches, in diameter. Such a wafer typically yields more than 100 chips. Making Cerebras’ giant chip required TSMC to adapt its equipment to make one continuous design, instead of a grid of many separate ones, Paulsen says. Cerebras’ chip is the largest square that can be cut from a 300-millimeter wafer. “I think people are going to see this and say ‘Wow that’s possible? Maybe we need to explore in that direction,’” he says.

Intel, the world’s largest chipmaker, is also working on specialized chips for deep learning, including one to accelerate training being developed in partnership with Chinese search company Baidu.

Naveen Rao, a vice president at Intel, says Google’s work on AI chips has convinced Google’s AI rivals they need new hardware, too. “Google is setting the bar for new capabilities” with its TPUs, he says.

Intel will discuss its design—which is the size of a typical chip, and planned to fit into existing computing systems—Monday at the same conference where Cerebras is showing off its giant chip. Intel plans to deliver them to customers this year. Rao says unusually shaped chips are a “tough sell” because customers don’t like to abandon their existing hardware. “To shift the industry we’ve got to do it in increments,” he says.

Jim McGregor, founder of analysts Tirias Research, agrees that not every tech company will rush to buy an exotic chip like Cerebras’. McGregor estimates Cerebras’ system could cost millions of dollars and existing data centers may need modifying to accommodate them. Cerebras also must develop software that makes it easy for AI developers to adapt to the new chip.

Still, he expects the largest tech companies, who see their destinies riding on competing in AI, like Facebook, Amazon, and Baidu, to take a serious look at Cerebras’ big, weird chip. “For them it could make a lot of sense,” he says.