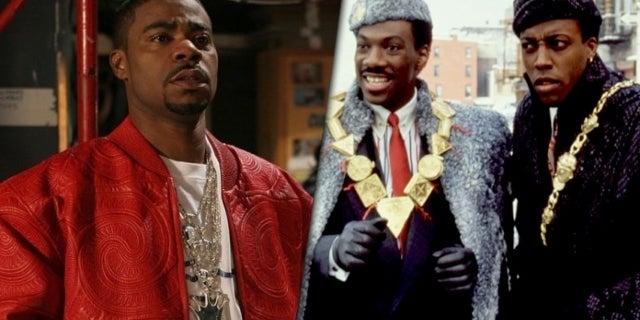 Now production on Coming 2 America is underway, news continues surfacing about new actors joining the cast. Days after revealing stars like Wesley Snipes and Leslie Jones had boarded the project, it’s being reported 30 Rock alum Tracy Morgan has agreed to appear in the highly-anticipated Coming to America sequel. The actor is set to play a new character named Reem, who will serve as brother to Jones’ character.

As previous reports suggest, Jones’ character will be the mother of Prince Akeem’s (Eddie Murphy) child from a one night stand. The film will show Akeem juggling his duties of being king of the fictional African nation of Zamunda while finding out he fathered a child in the United States.

Many stars from the original film are currently slated to return for the follow-up, including Murphy, Arsenio Hall, Shari Headley, John Amos, Paul Bates, and James Earl Jones. The production’s gone through a delay or two with Paramount initially intending release the film just under a year from now — the release has since been pushed back to December 2020. After Hustle & Flow filmmaker Craig Brewer boarded the project, Murphy released a statement officially announcing involvement in the sequel.

“After many years of anticipation, I’m thrilled that Coming to America 2 is officially moving forward,” Murphy said in a statement last year. “We’ve assembled a great team that will be led by Craig Brewer, who just did an amazing job on Dolemite, and I’m looking forward to bringing all these classic and beloved characters back to the big screen.”

“Craig’s ability to create a distinct cinematic world with each of his films is not only impressive, but also what made him exactly the voice and vision we needed to bring this story to life,” added Barris. “From Hustle and Flow to his work with Eddie on Dolemite Is My Name, he never fails to blow me away. He is a true auteur and we couldn’t be more thrilled to have him on board.”

Brewer will direct a script from Black-ish creator Kenya Barris, a rewrite of a project from original Coming to America scribes David Sheffield and Barry W. Blaustein. Barris is on board as executive producer while Murphy and Kevin Misher are producing.

Coming 2 America is expected to land in theaters December 18, 2020. Are you hyped to finally get a Coming to America sequel? Share your thoughts in the comments!