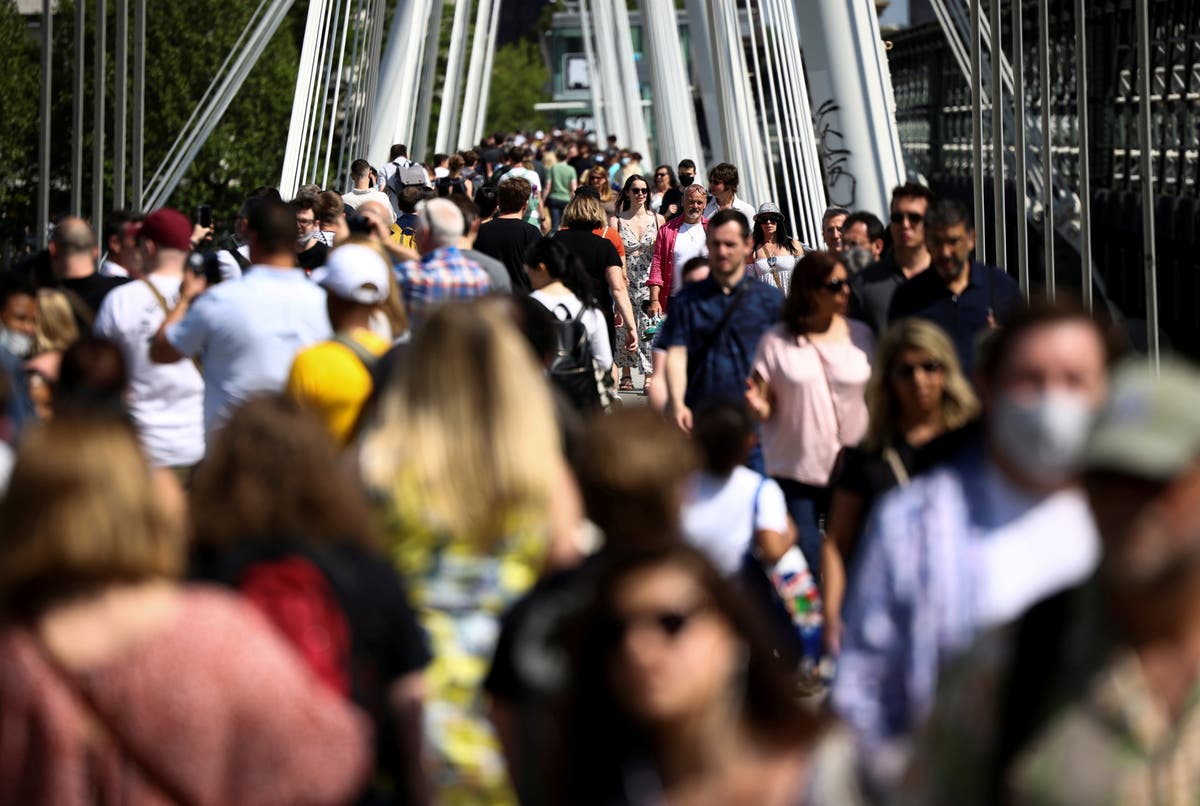 he Delta variant has an approximately 60% increased risk of household transmission compared with the Alpha or Kent strain, new research has found.

It comes as cases of the variant, first identified in India, are estimated to be doubling every four and a half days in parts of England, new data suggests.

Ministers are considering a delay to the proposed June 21 full reopening in England to give businesses and people certainty, according to reports.

Plans are being discussed for either a two-week or a four-week delay, the Times reports, dependent on whether the Delta variant continues to lead to a significant rise in infections, and, importantly, hospital admissions.

Uslter: Another 121 confirmed cases of the virus recorded.

One further death of a patient who had previously tested positive for Covid-19 has been recorded by Stormont’s Department of Health.

There were another 121 confirmed cases of the virus recorded.

On Friday morning there were 18 confirmed Covid-19 inpatients in hospital, none of whom were in intensive care.

We did everything possible to protect care home residents and staff, says Downing Street

Asked why the Government did not have a list of all care homes at the beginning of the pandemic, as admitted by Matt Hancock on Thursday, Downing Street said it had done “everything possible” to protect residents and staff.

The Prime Minister’s official spokesman said the Health Secretary had addressed the issue but added: “From the start of the pandemic we’ve done everything possible to protect care home residents and staff and we were always guided by the latest advice at the time.”

Asked whether it would be prudent for the care minister to now keep a record of all of the country’s care homes, he said: “Again, I think the Health Secretary said in front of the committee yesterday that the DH (the Department of Health and Social Care) and the department now has much better systems in place in terms of what you reference.”

He said the Government stood by everything said by Mr Hancock in front of MPs on Thursday.

Asked why local authorities where there are high levels of the Delta variant could not roll out vaccinations to all those over 18, the Prime Minister’s official spokesman said there were “targeted regional measures in place”.

He said: “We are continuing to follow the JCVI advice, as you know we are counting down through the age groups, anybody over the age of 25 can now come forward to receive a vaccination, and we will continue to roll it down to those over 18 as soon as we possibly can.”

He was not aware whether the Government had asked the JCVI to reconsider its advice, but he added: “I would point to the public pledge that we set out some time ago which is to offer all adults a first dose of the vaccine by the end of July and that remains our target and we’re on track to meet that target. Again I would just point you back to the stats that are published each day which shows the vast number of people who receive either their first dose or their second dose, and that will continue.”

Downing Street defended its borders policy in relation to the Delta variant of coronavirus, which was first identified in India.

Asked whether Boris Johnson regretted not putting India on the red list of travel restrictions sooner, now that the vast majority of cases were of the Delta variant, the Prime Minister’s spokesman said: “Well I think you’ve heard both the Prime Minister and Health Secretary answer questions on that.

“Specifically, I would point to the tough border measures that we’ve had in place for a fair amount of time now, that we’ve ensured that anybody arriving from India needed to quarantine at home, and then later as you said they were put on the red list which means that people have to quarantine in a hotel if they arrive in the UK from India.”

The percentage of people testing positive for Covid-19 is estimated to have increased in north-west England, the West Midlands, London and south-east England.

There are also early signs of a decrease in eastern England while the trend is uncertain for other regions, the ONS said.

In many regions positivity rates are very low, meaning trends are difficult to identify since they are affected by small changes in the number of people testing positive from week to week.

North-west England had the highest proportion of people of any region in England likely to test positive for coronavirus in the week to June 5: around one in 200.

South-west England had the lowest estimate: around one in 1,920.

Around one in 560 people in private households in England had Covid-19 in the week to June 5 – up from one in 640 in the previous week, according to the latest estimates from the Office for National Statistics (ONS).

This is the highest level since the week to April 10.

Around one in eight British adults are planning a trip abroad this summer, figures suggest.

Some 12 per cent of adults said they plan to go on a trip abroad before September, according to the Office for National Statistics (ONS).

Of these, 71 per cent said this would be for a holiday.

Younger groups were more likely to be planning a trip, 16 per cent of 30-34-year-olds said they plan to do so compared to 8 per cent of adults aged 70 and over.

A traffic light risk-based system with red, amber and green ratings for countries around the world determines the quarantine and coronavirus testing requirements people face when returning to the UK.

The ONS said it collected responses during the week that it was announced that Portugal was to move from the green to the amber list.

It analysed responses from 4,153 individuals surveyed between June 2 and 6.

On track to meet target of all over-50s having second jab by June 21, vaccine minister says

Vaccines minister Nadhim Zahawi said that ministers were on track to meet a target of all over 50s being offered their second jab by June 21, as he appealed as those who had not had a first dose to come forward to be vaccinated.

“We are on track for offering all over 50s who have had the first jab their second jab by June 21,” he told BBC Breakfast.

“We have got very high levels of uptake, in the 90 per cent, but we have got to make sure they get their second jab.

“Anyone who hasn’t had the jab, in that 5 or 6 per cent who didn’t have their jab, please come forward and have your first jab.

39,061 cases of the Delta variant of coronavirus confirmed in England

In England, 39,061 cases of the Delta variant of coronavirus have now been confirmed, along with 3,035 in Scotland, 184 in Wales and 43 in Northern Ireland.

The increase in the overall UK total – from 12,341 last week to 42,323 this week – has been partly driven by a reduction in test turnaround times and a faster process for identifying cases of the variant, Public Health England said.