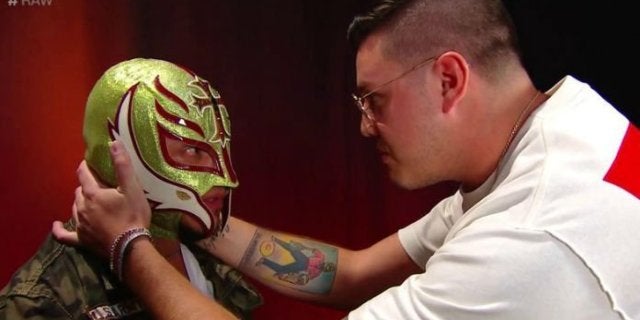 Rey Mysterio took to Twitter ahead of Monday Night Raw this week to tease a potential retirement from professional wrestling.

“So I’ve come to St. Paul, MN with my family,” Mysterio wrote. “@WWE is allowing me some time on #Raw to address everything on my mind for the last couple of weeks. I hope you’ll all join and support me as you’ve done over these years. Thank you.”

In a backstage interview Mysterio elaborated on those comments, saying after having his mask ripped off by Andrade and failing to redeem himself the following week in a Two-out-of-Three falls match, he said he felt like it was time to hang up his mask and let the new generation of wrestlers take over.

Is @reymysterio hanging up the mask???

… Not just yet. #RAW pic.twitter.com/NTZD5OmIiz

However as he was preparing to unmask, Mysterio was stopped by his son Dominick. The young man reminded the former WWE Champion that he promised to train him just like his uncle, Rey Mysterio Sr., had done years ago, and that his debut would be as a father-son tag team. Mysterio agreed and the two embraced to close out the segment.