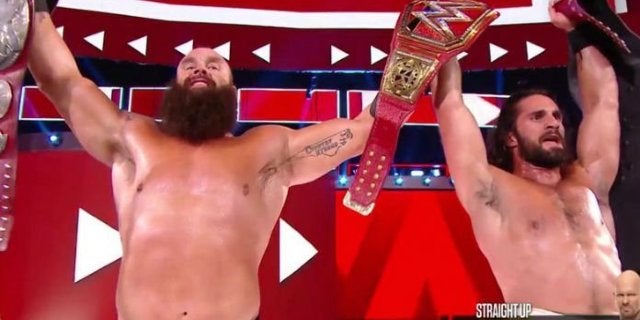 Braun Strowman walked into Monday Night Raw this week thinking he’d have a shot at becoming United States Champion. But by the end of the night, “The Monster Among Men” was one half of the new Raw Tag Team Champions.

Strowman’s match with US Champion AJ Styles was tossed out when Luke Gallows and Karl Anderson interfered. Seth Rollins, who was saved by Strowman a week prior from an attack by The O.C., ran down and chased away the heels to make the save.

Rollins found Strowman backstage afterwards and told him a new match was being set up for later in the night — the two of them vs. Anderson and Gallows for the Raw Tag Team Championships.

Just like with the first match, The O.C. had the advantage thanks to constant interference from the outside. But the faces managed to pull out a win when Strowman hit Anderson with a Running Powerslam. Styles tried to interfere, but Rollins cut him off with a Curb Stomp as he tried to slide into the ring.

Rollins and Strowman posed with their new titles to close out the show. However there was an awkward moment where Strowman looked at Rollins’ world championship, leading to yet another staredown between the champion and his potential challenger.

The win kicks off Rollins’ fifth reign as a tag team champion in WWE. He’s previously held tag title gold with Dean Ambrose (twice), Roman Reigns and Jason Jordan. Meanwhile Strowman is now in his second run with the Raw tag titles after winning them at WrestleMania 34 with a child (Nicholas) as his partner.

Strowman tried and failed on several occasions to get his hands on the Universal title in 2018. He recently addressed that in an interview with Sports Illustrated, saying he feels he doesn’t need a world championship at the moment.

“But it’s not a necessity right now,” Strowman said. “I don’t need something to boost my character. I get some of the biggest reactions out of anyone just walking out because of my sheer size and ability. It would be cool right now, but I’m here for the long haul and I have many, many more years of WWE in me, There’s plenty of time.”