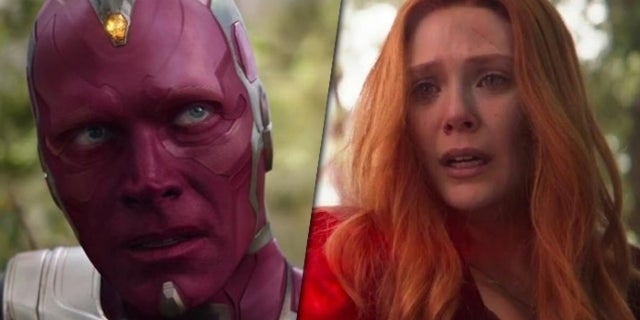 Despite being two of the strongest heroes in the Marvel Cinematic Universe, both Scarlet Witch (Elizabeth Olsen) and Vision (Paul Bettany) were dispatched relatively easy in Avengers: Infinity War. After the former came back to life in Avengers: Endgame, we saw her nearly kill Thanos (Josh Brolin) herself with a whole new skillset of unlocked powers. If she had all that power locked away inside, why wasn’t it activated when it mattered most?

According to the filmmakers, it all comes down to Vision being attacked very early on during Infinity War. After being stabbed by Corvus Glaive’s enhanced weaponry, Vision becomes a total liability the rest of the movie — something pretty evident to anyone who watches it.

“Vision gets skewered at the beginning of that fight, so he’s really not functioning at full power,” Joe Russo explains to Wired. “He then becomes a liability in the fight because now, Scarlet Witch has to protect a crippled Vision and it puts her at a disadvantage.”

Anthony Russo then points out Corvus’ weapon is an otherworldly artifact with just the right enhancements to take down vision, saying “as Vision mentions, that weapon [Corvus Glaive’s glaive] has an effect on him that he didn’t expect.”

“Once Wanda and Vision are cornered, because Vision can’t function at that point, Cap, Natasha, and Falcon have been functioning as a unit for three years since Civil War,” Joe explains. “They surprise attack Proxima [Midnight] and Corvus and get the jump on them and help Vision and Wanda escape.”

Now that Avengers: Endgame has come and passed, MCU fans will know Vision is still dead in the current timeline as the Avengers decided not to bring back anyone not lost as a direct result of “The Snap.” That creates an interesting scenario as both Olsen and Bettany are scheduled to appear in their very own series on Disney+ in a year and a half. Long before the series was officially revealed, Olsen jokes she and Bettany had discussed the two getting their own property rooted in domestic bliss.

“That’s what’s so funny, is Paul planted this idea before Disney was launching their own platform. I think it was just funny to him to think of us as doing a domestic sitcom, and somehow whatever he planted, he planted the seed and now we’re actually doing something,” Olsen said.

“And it’s gonna be very different than what Paul would joke about, but I’m sure a lot of super-fans of the comics could have their own ideas of maybe what it could be. So I’m very excited.”

Some have expected the series to take after Tom King and Gabe Walta’s critically-acclaimed The Vision, which explores the android moving to the suburbs of Washington D.C. and creating an android family of his own.

What do you think WandaVision will be about? Will Vision actually come back to life? Let us know your thoughts in the comments below or by tweeting me at @AdamBarnhardt to chat all things MCU!

Avengers: Infinity War is now streaming on Netflix while Avengers: Endgame is available wherever movies are sold. WandaVision is currently scheduled to hit Disney+ spring 2021.