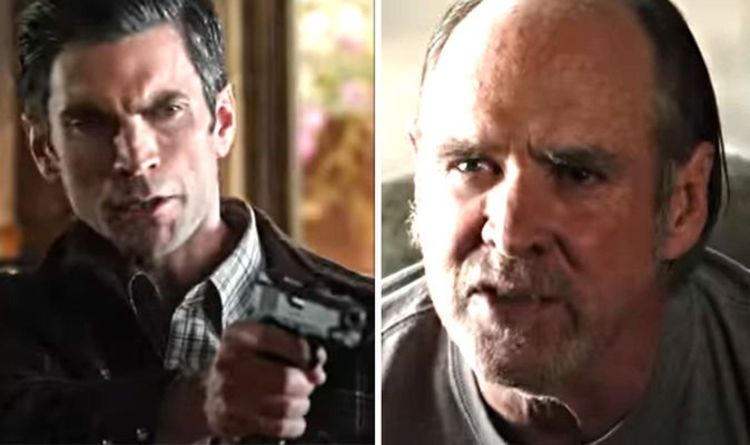 Yellowstone season four will be coming to The Paramount Network on November 7 and fans cannot wait for some answers. The trailer gives some insight into what happened in the immediate aftermath of the attacks on the Duttons. Jamie Dutton (played by Wes Bentley) may go head to head with his biological father Garrett Randall (Will Patton) in the new season.

The Yellowstone season four trailer has just dropped and the spine-tingling video is full of action.

The trailer opens with flashbacks of John Dutton (Kevin Costner) and his daughter Beth (Kelly Reilly) as they are targeted by anonymous killers.

Kayce Dutton (Luke Grimes) was also left to take on a group of gunmen and all three of the Duttons were in grave danger.

Ranch hand Rip Wheeler (Cole Hauser) finds John at the roadside, but things are not looking good for the patriarch.

The video then cuts to Jamie looking shocked, saying: “Oh my god” – has he figured out who targeted his family?

He was one of the main suspects as to who was behind the attacks, but some fans have been saying all along that he does not have it in him to kill his adoptive family.

The trailer then shows Kayce’s wife Monica (Kelsey Chow) and son Tate (Brecken Merrill) emerging from the house, confused as to what is happening.

They seek safety in the bunkhouse and the trailer proceeds to show many of the other characters in danger.

He fell off a horse in the season three finale and fans were worried he had been left for dead.

However, another viewer pointed out how Jamie’s surname on his birth certificate is Randall.

One fan replied: “Looks like Jamie has a gun on his bio dad, so I’m going with the bio dad.”

One of the main storylines in the upcoming season is likely to focus on Jamie’s change in character.

Another viewer said: “I’m so excited! I can’t wait to see this season. I am looking forward to see how Jamie’s story unfolds.

“I hope we get to see Wes Bentley go bad because he’s so good at playing a villain but I do think he will wind up saving the ranch after the shock and anger wears off.

“I think he’s going wind up killing his bio dad in the end because deep down he’s a Dutton and he always wanted Johns approval.” [Sic]

This season will see Jamie decide whether he is a Dutton or a Randall and it may be a tough choice for him.

One fan commented: “I think Jamie started this war bc his bio-dad got in his head and when things started he had remorse and is trying to fix it. We all know he is good at screwing up!”

When Jamie is heard saying “oh my god” in the trailer, this could be a realisation that he has made a terrible mistake.

At the end of season three, Garrett told Jamie he must “kill the king” if he wanted to gain power.

With this in mind, Jamie may have listened to his father but regrets his decision as he has seen the consequences of his actions.

Yellowstone season 4 premieres on The Paramount Network on November 7.