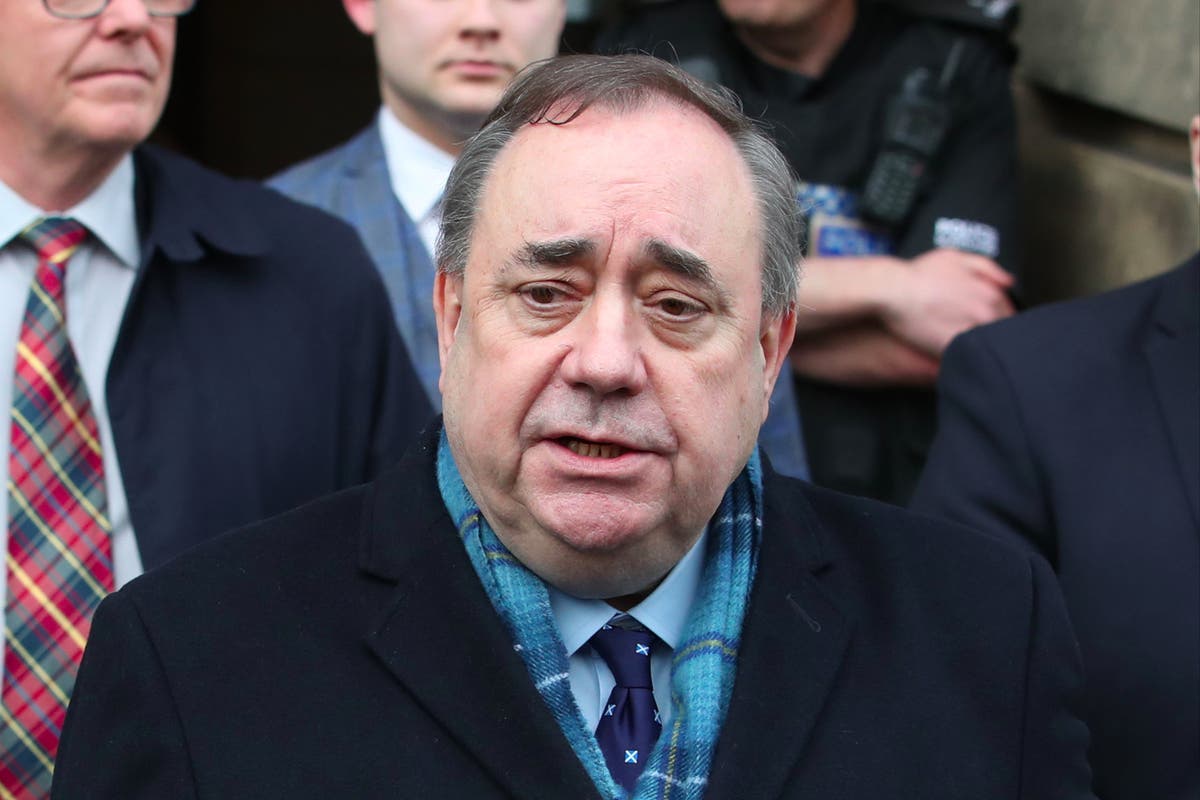 lex Salmond has claimed there has been “malicious and concerted” attempt to see him removed from public life.

Mr Salmond named people he alleges to have been part of efforts to damage his reputation – including Nicola Sturgeon’s husband and chief of staff – as well as describing the Crown Office as “not fit for purpose” under its current leadership.

Meanwhile, First Minister Ms Sturgeon has claimed there is “not a shred of evidence” that Mr Salmond can show to prove there was a conspiracy against him.

However, the former first minister alleged his successor misled Parliament and breached the ministerial code.

The committee is probing the Scottish Government’s botched handling of harassment allegations against him – which saw Mr Salmond win a £512,000 payout following a case at the Court of Session in Edinburgh.

MSPs previously decided against publishing the submission the former first minister made to a separate inquiry, which is considering whether Ms Sturgeon breached the ministerial code. The Scottish Parliamentary Corporate Body (SPCB) then concluded “on balance” it would be “possible” for the document to be published.

Mr Salmond said: “The inescapable conclusion is of a malicious and concerted attempt to damage my reputation and remove me from public life in Scotland.

“It is an attempt which would, in fact, have succeeded but for the protection of the court and jury system and in particular the Court of Session and the High Court of Justiciary.

“However, underlying all of this and perhaps the most serious issue of all is the complete breakdown of the necessary barriers which should exist between Government, political party and indeed the prosecution authorities in any country which abides by the rule of law.

“I leave to others the question of what is, or is not, a conspiracy but am very clear in my position that the evidence supports a deliberate, prolonged, malicious and concerted effort amongst a range of individuals within the Scottish Government and the SNP to damage my reputation, even to the extent of having me imprisoned.

“That includes, for the avoidance of doubt, Peter Murrell (chief executive), Ian McCann (compliance officer) and Sue Ruddick (chief operating officer) of the SNP together with Liz Lloyd, the First Minister’s Chief of Staff.

“There are others who, for legal reasons, I am not allowed to name.”

He added: “The real cost to the Scottish people runs into many millions of pounds and yet no-one in this entire process has uttered the simple words which are necessary on occasions to renew and refresh democratic institutions – ‘I Resign’.

“The Committee now has the opportunity to address that position.”

A spokesman for the former first minister confirmed an agreement with Holyrood clerks “clears the way” for him to attend an oral hearing of the Committee on Wednesday.

First Minister Nicola Sturgeon said: “What we have not seen is a shred of evidence to back these wild claims up.

“Now, in front of the Parliament, the burden of proof is on Alex Salmond.

“It is time for insinuation and assertion to be replaced with actual evidence.

“And if, as I fully expect, there is no evidence, because there was no conspiracy, then people will draw their own conclusions.”

The former SNP leader claims in his latest published submission that evidence held by the Crown Office is being blocked from the Committee.

The former first minister said: “Despite that deplorable prohibition, I can confirm that all of the material factual statements made in this submission are supported by documentary evidence.

“Where I am legally allowed to direct the Committee to such documents, I will be happy to do so.”

A Crown Office and Procurator Fiscal Service (COPFS) spokesman said: “We take seriously our responsibility to uphold the law and to protect the dignity and rights of all those who come into contact with COPFS.

“Scotland’s prosecutors have acted independently and in the public interest at all times when considering matters related to this case.”

An additional written submission by Ms Lloyd said: “I understand, as a result of information shared with me under the committee’s obligations on data processing, that the committee intends to publish claims by Mr Salmond that I was part of some form of ‘conspiracy’ against him.

“I reject the allegation in its entirety and note that it is not substantiated by any evidence and is founded on a number of claims, that are false.

“In that regard I welcome the fact that the committee has already rejected previous claims that a conspiracy would be demonstrated by text messages between members of staff and Scottish Government employees, on the basis such claims were demonstrably false.”

An SNP spokesman said: “This is just more assertion without a shred of credible evidence.

“Several of the women have already made clear how utterly absurd it is to suggest they were part of a conspiracy to bring him down.

“And yet Alex Salmond is still making these ridiculous and baseless claims and lashing out at all and sundry.

“People who supported him loyally for years and worked tirelessly to get him elected don’t deserve these smears.

“And women who made complaints about his behaviour, who barely merit a mention in his conspiracy dossier, most certainly deserve better.”