Glenn Hoddle expects Real Madrid to be boosted by the return of captain Sergio Ramos for their Champions League semi-final second leg but has backed former club Chelsea to get the job done at Stamford Bridge.

But the visitors failed to further capitalise on their dominance and Karim Benzema showed his class with an unstoppable volley on the half-hour mark to equalise.

The scoreline remained the same to set up an enticing second leg and Madrid will be encouraged despite Chelsea’s crucial away goal, with inspirational skipper Ramos passed fit to feature tomorrow night. 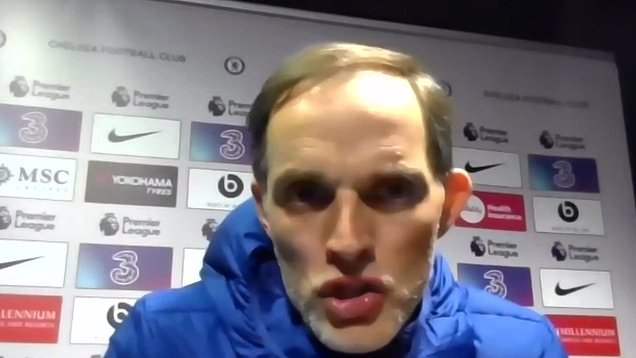 Ramos has been sidelined for over a month with a calf injury and ex-Chelsea manager Hoddle believes the Spaniard’s return is likely to be significant in west London.

However, asked whether Chelsea will finish the job they started in Spain, Hoddle told the Evening Standard: ‘Yes, I do. I said before the first leg that I thought over two legs they would get through.

‘They are not playing the greatest Real Madrid side ever. I think Real will have a stronger side at the Bridge on Wednesday than they had in the first leg and I think Chelsea are going to have to play well.

‘But I thought there were major parts of that first leg where Chelsea were in control and should have got the second goal.

‘Sergio Ramos will strengthen Real if he comes back in but I think Chelsea should be buoyant, they should be positive and I think they will win the game.

‘They are playing with a lot of confidence and Thomas Tuchel has done a wonderful job.’

Switching his attention to this evening’s semi-final, Hoddle said Paris Saint-Germain ‘have a chance’ of turning around their 2-1 deficit if Kylian Mbappe is passed fit to start at the Etihad.

‘If PSG are going to turn things around against Manchester City, Neymar and Kylian Mbappe are going to have to turn it on so I am going for two players this week,’ he added.

‘Mbappe is a doubt but they are wonderful players and if the Frenchman is fit then PSG will have a chance.’

A calf problem meant Mbappe missed PSG’s Ligue 1 clash with Lens but Pep Guardiola is confident the France sensation will return to play a key role against his side.

‘He’s going to play and I’m looking forward to him playing,’ the City head coach told reporters at his pre-match press conference.

‘For the football and for the game itself, hopefully he can play.’