The Arsenal manager made a number of contentious selection decisions ahead of must-win match, relegating Pierre-Emerick Aubameyang to the substitutes’ bench and deploying Willian on the left wing, despite his almost total lack of form.

Alexandre Lacazette and Bukayo Saka squandered glorious opportunities to put Arsenal ahead either side of half-time but it wasn’t until the introduction of the skipper, with 20 minutes remaining, that Arsenal began to threaten on a regular basis.

Slavia had coped comfortably with everything Arsenal could mustre up until Aubameyang played Nicolas Pepe through for what appeared as though it would be the decisive goal on the night, only for Arsenal to shoot themselves in the foot again.

After Gabriel and Cedric conspired to needlessly lose possession in their own half, Slavia forced a 94th minute corner and, from the resultant set-piece, Tomas Holes headed home the crucial away goal that swung the balance back in favour of the underdogs. 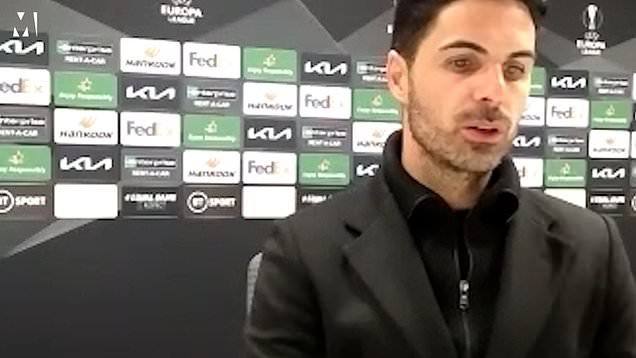 Despite the lack of attacking threat offered by Arsenal’s forward line, who were up against a depleted Slavia defence, and the fact the Gunners have now gone 14 games in all competitions without registering a clean sheet, Bellerin claimed he saw nothing to concern him ahead of the return leg in a week’ time.

‘It’s difficult to take, but at the end of the day there’s still everything to play for and it’s 1-1,’ the Spain international said afterwards. ‘We know how they play and I think we had really good moments in the game.

‘We broke down their pressure and we created chances, so there’s nothing that worries me for us to go to Prague and do the job there.

‘You can blame it on anything you want, but at the end of the day it comes down to the goals we score and the goals we concede, and I think throughout the game we put ourselves in situations that we could have taken the lead, but this is football.

‘We know when we make mistakes and at the same time, I think it’s a very positive performance when you look to go away next Thursday. They’re a team that makes things difficult for every single team that they’ve played against, and I think I felt comfortable on the ball and I felt like the team did all the right things that we were asked to do and there’s still 90 minutes to play for. We’re ready for it.’