Onlookers were appalled by the scenes, which they said showed a ‘blatant disregard’ for the huge strain the NHS is under.

Around 200 people gathered in Leeds for the snowball fight, which one student on Twitter dubbed ‘the battle of Hyde Park’.

Footage shows the participants split into two opposing groups, charging at each other and throwing snowballs at around 2pm on Thursday.

Mass gatherings are banned under the current lockdown measures in England and people can only leave the home for a limited number of reasons, including for exercise outdoors with one other person from a different household.

Police can issue fines starting at £200 for breaches.

Liam Ford, who lives nearby, shot a brief video after coming across the commotion while on a walk with his girlfriend.

The furloughed retail worker said: ‘With what’s going on, I can’t condone mass gatherings like that.

‘I’ve really come to appreciate going for a walk and having that time, I think these people have abused that.

‘We were going for a walk in the park, it’s literally around the corner from our house, and we heard all this commotion. I couldn’t believe what I was seeing.

‘There were two groups of around 100 people each side, stood apart, charging at each other and throwing snowballs.

‘I was stood there for a good ten minutes and there times when it quietened down and then picked back up again.

‘It just shows a blatant disregard for the NHS and the strain it is under.’

Liam shared the video on social media and one Twitter user fumed: ‘Pandemic? What pandemic?! It’s no wonder people are dying when this sort of thing occurs.’

He added: ‘It’s quite an open park so you can see the middle of it from wherever you are. Every so often you could hear them picking up again.

‘For there to be so many people, I think there must have been some sort of organisation behind it.’

Hyde Park is a large public park north-west of Leeds city centre, within an inner-city residential area of the same name.

It is a hugely popular area with students and houses a large number of student digs.

One student who took part in the snowball fight has defended the mass gathering as ‘the most fun we’ve had sober’.

Max Powell, a first year student at Leeds Beckett University, dismissed concerns over the gathering spreading Covid as ‘it isn’t much of a problem to young healthy people’.

‘Look at the stats. Covid isn’t much of a problem to young healthy people who aren’t in contact with vulnerable people while at uni.

‘Most people just turned up with a few mates and hoped there’d be people there.

‘I went along with people from other accommodation I haven’t seen for a while.’

The large crowd was dispersed without any issues, police said.

A spokesperson for West Yorkshire Police said: ‘We are aware of this matter. All persons dispersed.’

It comes as the Yorkshire Ambulance Service, which covers the region, declared a major incident following a surge in 999 calls due to the worsening weather conditions and rising coronavirus infections.

Figures published by NHS England earlier also showed that around one in five major hospital trusts in England had no spare adult critical care beds on January 10 as the second wave approaches its peak.

Some 27 out of 140 acute trusts reported 100% occupancy of all ‘open’ beds, including Leeds Teaching Hospitals NHS Trust.

Leeds has recorded the second-highest number of new cases in Yorkshire over the last 24 hours.

The highest number was recorded in North Yorkshire, with 463, while Leeds followed closely behind with 433 new cases. 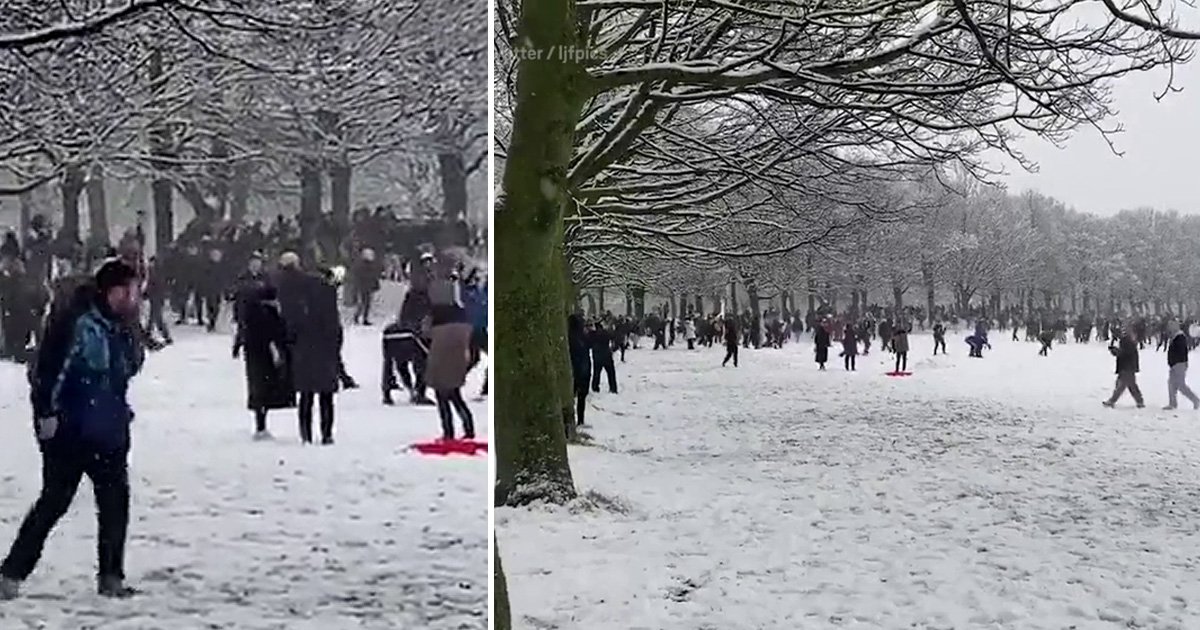